Several workers expressed concerns regarding policing vaccine passes, and others were still unsure about the rules of the Orange traffic light setting or how they would be implementing them.

A central Dunedin cafe assistant, who did not want to be named, said she felt that tomorrow, "all hell will break loose", after staff had been "copping a lot of angst" about mask use and social distancing regulations already in place.

She said the days following the announcement had been "really sad" as multiple customers had approached her to say goodbye, saying they would not be back in to the cafe after tomorrow due to their vaccination status.

"It sounds dramatic, but you get to know people, you build a rapport, then they say ‘hey, I won’t be back’." 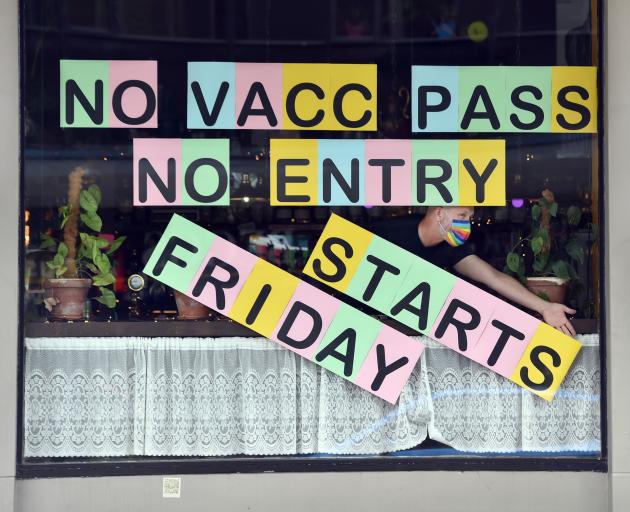 Signage on the windows of Woof! bar in Dunedin's CBD now displays the requirement, from tomorrow, to hold a valid vaccination pass or be denied entry to the popular spot. PHOTO: PETER MCINTOSH
A staff member at a restaurant in the city, who also did not want to be named, believed the Government should have given a "more realistic" timeframe between announcing the change and implementing it.

Because the restaurant she worked at was a chain it was an executive decision as to how the changes would be managed.

The decision would likely be passed down to staff late last night or today, she said.

She said mask use had already been an issue, and she had concerns that the new requirement for vaccine passes might become an added pressure for already-strained staff members.

Some businesses, however, were clear about what they were going to do.

Woof! owner Josh Thomas said he and his staff were "really looking forward" to the change, which would allow the bar, after patrons were successfully signed in, to operate under essentially Level 1 restrictions.

"For us it’s a no-brainer, from a business point of view but also in terms of the health and wellbeing of our staff and patrons."

There would be a dedicated person on the door scanning people in.

"There will be a few tweaks along the way ... but people in a bar are used to being able to move around, mix and mingle, so we’re really looking forward to the change."

"In a perfect world, every place would have a dedicated staff member at the door scanning passes, but it’s just not practical."

It was likely patrons would have passes checked once they had entered the premises, as they were seated or approached the bar.

Staff were feeling a "little apprehensive" about the changes.

The most awkward part was likely to be "the instance of, say, six people come in for a drink after work, five of them have their passes and one says ‘oh my God, I’ve lost my purse at work’; that’s going to be tricky.

"That will be the awkward one, when one person in a large group hasn’t got it."

Under Orange, hospitality venues, such as cafes, bars, restaurants and nightclubs, can open with no restrictions if they follow the rules for vaccine passes.

If a venue chooses not to follow the pass requirements, it can open only for contactless pick-up or delivery.

• For specific business advice on operating at the three traffic light levels, go online to business.govt.nz.