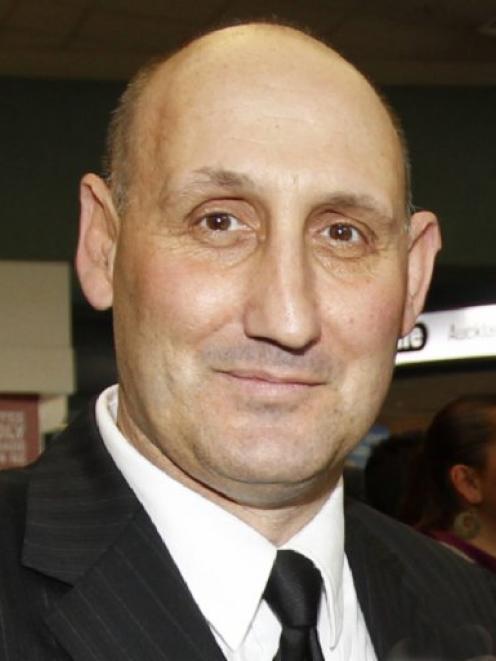 Jock Hobbs
Former All Blacks captain and New Zealand Rugby Union board chairman Jock Hobbs has died at the age of 52.

His death, in Wellington Hospital, came six years after he was diagnosed with leukaemia in 2006.

Hobbs is survived by his wife Nicky and four children.

In a statement, his family said: "It is with great sadness that we announce the passing of Jock Hobbs this afternoon. Our family would like to thank everyone for the outpouring of support we have received over the last week and in particular, express our gratitude to all the staff at Wellington Hospital that were involved in Jock's care.''

The NZRU was to issue a statement shortly.

But he stepped down from both roles in May 2010. He was diagnosed with a chronic form of leukaemia more than five years ago, and needed six months of chemotherapy in 2010.

In 2005, Hobbs was central to New Zealand's bid to host the cup, travelling to the International Rugby Board headquarters in Dublin with rugby ambassadors Tana Umaga and Colin Meads and then-prime minister Helen Clark.

About the same time that he stood down from the NZRU and RNZ 2011, the finance company for which he was a director, Strategic Finance, collapsed. It was New Zealand's second-biggest finance company collapse, after Bridgecorp.

The All Black flanker played 21 tests between 1983 and 1986, four as captain, before he had to retire prematurely from the game after complications from concussions.

In a tweet, former All Black coach Sir Graham Henry said: "Saluting a true hero of our game, Jock Hobbs helped lead New Zealand Rugby through some of our greatest times.''

Another tweet from the Wallabies said: "On behalf of Australian Rugby, we send our condolences to the family of Jock Hobbs following his passing this afternoon.''

"It's with great regret that we bring you the very sad news that in the last hour former All Blacks Captain and NZRU chairman Jock Hobbs passed away.

"Jock was with his family at Wellington Hospital. We've lost a very dear friend, a rugby great and an incredible New Zealander. All our thoughts are with Jock's family at this sad time."

All Black Cory Jane tweeted: "RIP Jock Hobbs.. A Great man and legend for all he did for NZ rugby.''

The Labour party expressed its sympathy to Hobbs' family and friends.

"Jock Hobbs was a tremendous Kiwi who dedicated his life to our national sport and was a driving force behind New Zealand's successful bid for the 2011 Rugby World Cup. We will always be grateful for his contribution to our country.

"He was an inspiration to all Kiwis not only for his amazing achievements as a top sportsman and administrator but also for the courage he showed while battling his illness.''

Sanzar tweeted: "Sanzar's thoughts are with the Hobbs family, as former All Blacks captain and NZRU chairman Jock Hobbs has passed...''.

Waikato Rugby also tweeted: "RIP Jock Hobbs. Your contribution to NZ rugby will never be forgotten. Both the rugby community and NZ mourns your passing.''

The Highlanders tweeted: We send our love to the Hobbs family after the passing of a great man."

The Blues said: "Thoughts and prayers are with Michael Hobbs and the rest of his family following the death of NZ Rugby legend Jock Hobbs today''.

NZRU chairman Mike Eagle said it was with a heavy heart that Hobbs' passing was acknowledged.

"Our hearts and love go out to Jock's wife Nicky, his children Emily, Michael, Penny and Isabelle, as well as his wider family.

"New Zealand has lost an inspirational leader with an incredible passion for the game of rugby and the part it plays in our lives. I know many New Zealanders will join us in expressing their sorrow at his passing.

Chief executive Steve Tew said: "Rugby has lost a great friend. We will all miss his integrity, dogged determination and incredible sense of justice.''

Prime Minister John Key said he was saddened by the news.

"I have known Jock for a long time and have enjoyed his company on many an occasion. We have talked and laughed and discussed the country's political and sporting problems. I will miss him very much.''

"This was possibly his finest hour. Winning the trophy was certainly one of New Zealand's finest hours,'' Mr Key said.

"Jock was a man whose determination drove him to many successes in his life. It was that determination that saw him wage war against his illness for a prolonged period.

"I know I join with Jock's wife Nicky, his four children, and many friends in being very grateful for the time we had with him.

"I join with all of them in celebrating his life and knowing that ours will be the poorer without him.''

Ali Williams, who plays alongside Hobbs' son Michael in the Blues, said his and the team's thoughts were with the Hobbs family.

"Jock was an amazing man," he said.

"The thing that I remember most about Jack was a saying he had. He used to say, 'I never was the best, but whenever I did anything, I gave it 100 per cent'. That sums the guy up. He wasn't one who had a lot of words but he did things that earned so much respect.

"This group of All Blacks of the last 10 years or so had a lot to do with him and had a lot of respect for him. New Zealand saw last year what he can do and what he did do.

"Our thoughts are all with Jock and Michael's family."

The Blues are in South Africa preparing for their second game of a two-match trip of South Africa.