Delving into an alien world in the Antarctic 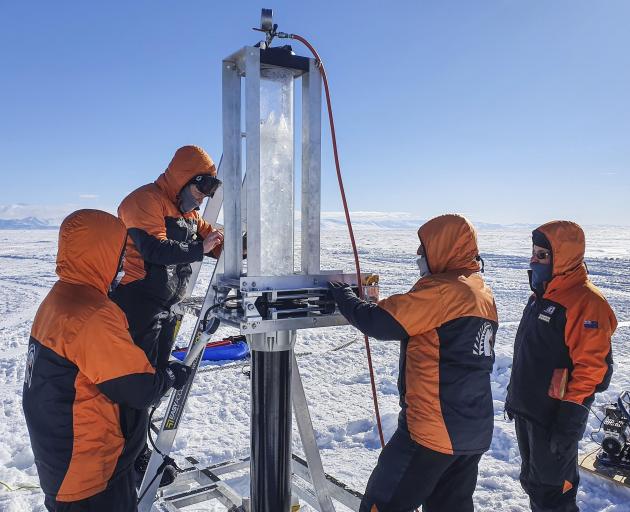 Niwa scientists (from left) Greg Leonard, Natalie Robinson, Steve Parker and Ken Ryan attach a sampling unit to the core barrel, used to study platelet ice in the Antarctic. PHOTO: BRETT GRANT
In a mysterious world just below the Antarctic ice, a delicate web of ice crystals forms a habitat that is special and largely unknown. Thanks to ingenious new technology, researchers can now study this environment in detail, including the life that calls it home. But will climate change destroy this fragile habitat before we can know all its secrets, asks Jessica Rowley.
The Antarctic feels like an alien planet.

It is a truly extraordinary place, holding more world records than an Olympic athlete.

It is the southernmost, highest, driest, windiest, coldest and iciest continent.

The Antarctic is a dream place to work for those fascinated by the frosty wilderness.

Dr Natalie Robinson is one of those people; she’s one of the lucky few who have experienced this vast, freezing and dazzling landscape.

She’s a marine physicist whose work focuses on the Ross Sea.

Platelet ice is a several-metre-thick layer of thin and delicate ice crystals that grow and lock together to construct a dense but fragile maze, creating an environment unlike any other on Earth.

Platelet ice forms a protective habitat for algae and bacteria — the organisms that underpin the entire food chain — to flourish.

For decades, this mysterious platelet ice ecosystem has been theorised as being incredibly important to the marine food web.

But its fragility and rarity make it notoriously difficult to study. It is an unknown entity.

Or it was, until now.

Dr Robinson has just returned from a six-week deployment in the Antarctic with a team of physicists and biologists, testing out an innovative sampling technique.

The new drill system, designed by Niwa colleague Dr Craig Stewart, is the first of its kind.

It works a bit like an apple corer, plunging into the ice without any spin, allowing platelet ice layers to be captured along with the water that fills the gaps between the ice crystals.

This prevents the structure from collapsing and maintains the platelet layers, so the algae, bacteria and animals that live between the platelets can be collected along with their habitat.

Ultimately, the drill system will be complemented by a range of other sampling devices and instruments so scientists can observe and quantify a wide range of characteristics, including those of the ocean, platelet ice, sea ice, snow cover and atmosphere, plus any associated biology, so the links between them can be identified.

"I am over the moon with how our expedition went," Dr Robinson said.

"The new technique worked even better than we hoped, producing great samples.

"It means that we can now study this ecosystem in a way that we haven’t been able to before."

Time is of the essence for exploring and investigating platelet ice in the Antarctic.

The continent is warming, fast. In February 2020, the highest ever temperature was recorded there — a balmy 18.3degC.

"This research is so important, given how climate change is impacting the region.

"The platelet ice habitat exists on a knife edge, needing quite specific conditions to form.

"Any small shifts in the environment could change where, when, and even if platelet ice forms.

"Such impacts could be disastrous for the animals that need it to survive, with knock-on effects for the wider Ross Sea marine ecosystem.

Life in the Antarctic

Beyond the science that keeps her busy at the bottom of the world, what is life like for someone living and working in such an extreme environment?

"The quietness of the place is the most unusual thing for me," she said.

"When it’s not windy, there is a level of silence that I’ve never experienced before.

"We also visit over the spring and summer, which means we have 24 hours of continuous daylight; the sun never sets.

"This sends your body clock completely out of whack. The first time that I went to Antarctica, I slept about four hours per night."

It is not just sleep that is affected by the continuous sunlight.

The long hours of exposure and reflective qualities of the snow mean sunburn is also a very real threat.

"One of my friends decided to sleep outside one night, which seemed like a very romantic idea.

"But because her mouth was open when she was sleeping, she got sunburnt on the inside of her mouth.

As with any long expedition or time away from home, food became immensely important.

This is especially true for such a cold climate, where the human body needs about double the number of calories that it usually does, just to keep warm.

"The coldest temperature I’ve experienced was when I stepped off the plane and it was -37degC.

"The hairs in my nose immediately froze. Even though we wear several layers of clothing, we still need tonnes of food.

"We are fed a diet of high energy snack bars and drink double the amount of water than we would back at home, because air is so dry.

"It’s also really important to have nice treats. This year, I took pre-made scone mix, long-life cream, and jam so we could eat freshly made scones.

"They went down a storm!"

Now in warmer climes with access to all the scones she could dream of, how does she reflect on her time away and stepping back into reality?

"It’s great to be with my family again, especially my children.

"The expedition was extended this year because Covid-19 meant we had to do two weeks of isolation, which made it a bit more difficult.

"It was nice to be away from all the continuous news and emails though. You’re basically off-grid because internet access is so limited.

"It’s funny to be away from society for so long because you don’t know what kind of world is waiting for you, especially these days.

"I was in Antarctica during the 2007-08 financial crash and when Donald Trump became the US president in 2016 — those were crazy things to come back to.

"Thankfully this year, things hadn’t changed too much."

- Jessica Rowley is a senior media adviser with Niwa.