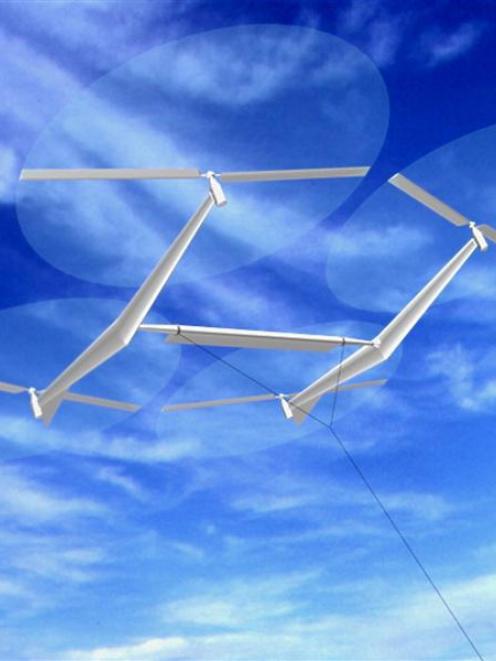 An artist's impression of a helicopter-style kite, a kilometre above the Earth, generating electricity from the wind. By Ben Shephard.
The hundreds of wind turbines planned for electricity production in the South just might become yesterday's technology some time in the next decade.

That is a prospect held up by Mid-Canterbury engineer Pete Lynn, who has spent two years as a consultant for a United States company developing kites for use in electricity generation.

While the idea of flying generators spinning in the wind on a kite attached to the earth by a kilometre-long cable might seem an unlikely prospect, it is exactly the sort of project under way in half a dozen laboratories around the world.

While he is still bound by a confidentiality agreement, he hopes the public will see signs of progress over the next year.

Nature magazine reported last month that Makani has generated small amounts of power from kite systems and is planning to run a bigger prototype "this year".

Makani's website offers little detail about its plans to "harness high-altitude wind energy" but claims kite power would be cheaper than coal-fired power plants, "the current benchmark of the lowest cost source of power".

Mr Lynn told the Otago Daily Times this week that control over the kite, or wing, was the big issue to be resolved but technology already allowed commercial jets to land and take off automatically.

"One of the complexities is that the wing has to fly on the end of a tether . . . which means you can't use the traditional software exactly or the autopilot systems exactly.

"They have to be modified a bit. It also changes the dynamics of the system a bit.

Mr Lynn said although each new fuel crisis gave a boost to interest in kite generators, the "tipping point" had not yet been reached to make it a commercial reality.

"So it's still at the stage where everyone says: yes, the numbers add up on this, if we can solve all the control problems and get a system - that has this big, huge aeroplane, effectively, flying around on this tether - operating in a safe and reliable manner."

He believed kites would ultimately be much cheaper than wind turbines and would supersede them.

"If the kite power transitions to being more economical than wind power, then it will fairly quickly take over the market."

The wind turbine, excluding the foundation, would weigh more than 270 tonnes.

The equivalent kite system would weigh less than 30 tonnes, including a 10-tonne kite and a 10-tonne tether carrying electricity to the ground.

Mr Lynn said kites a kilometre above the Earth's surface were able to use stronger winds and "sweep" much more sky than a wind turbine.

"That means you can generate power in lighter winds . . . so instead of only generating 25% of the time you might generate for 50% of the time."

Mr Lynn said kites would be much more obvious over a wider area and would ideally be used at sea.

"You don't need to have a big foundation and a very rigid pole off-setting the wind force."

Launching and landing a kite would be achieved by putting power back into the system, causing the rotors to act like the blades of a helicopter.

"All the components have been well demonstrated.

It's a matter of cobbling all that stuff together."

And that was the task Makani was engaged in, with more than $US15 million of funding from Google.

Mr Lynn said his part in the project was now over but he would continue to "encourage from the sidelines".

Mr Lynn's father, also Peter, is a world renowned figure in harnessing the power of the wind for such things as kite-surfing.

Son Peter (35), with a University of Canterbury engineering degree and an interest also in kite surfing, has spent the past five years pursuing the idea of using kites for electricity generation.

TrustPower, which has resource consent to erect 147 3MW wind turbines at Lake Mahinerangi, inland from Dunedin, and Kaiwera Downs, in Southland, monitors new and emerging technology.

However, community relations manager Graeme Purches said kite electricity generation was far from being proven to be viable and would have no impact on the company's plans in Otago and Southland.

The company has not set a date for work to begin on either wind turbine project.

"We are waiting on economic conditions and other factors to gel."

Other options
Those attempting to prove that electricity production from kites is viable include . . .

> Makani, California: A kite wing tethered at either end carrying generators driven by propellers up to a kilometre from the ground. Bigger prototype due this year.

> Sky Windpower, California: An unmanned helicopter with four horizontal rotors. A small prototype is due to be tested this year.

> Astronaut and physicist Wubbo Ockels, Holland: A "laddermill" with multiple kites at various heights driving a turbine on the ground.