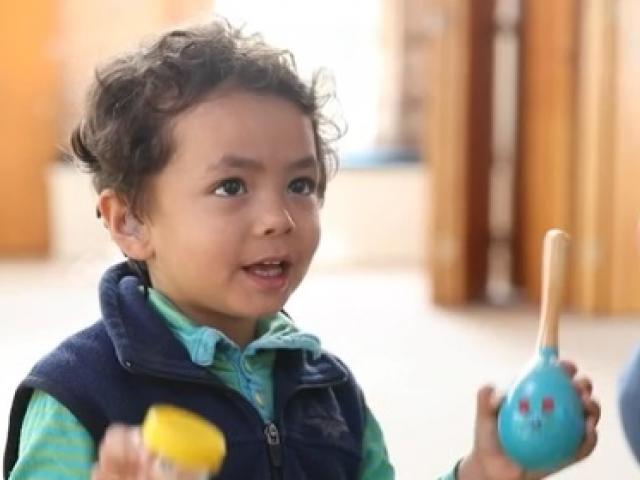 At four weeks old, Matthias Berndt was found to have severe hearing loss in both ears.

At just 2, the youngster's only shot at hearing was to undergo a 4-hour surgery for cochlear implants.

The surgery was a success and nearly two years later not only can Matthias hear sounds, he can speak three languages: German, Mandarin and English.

The youngster has learned from his Chinese mother Inga Wang and German father Clemens Berndt who speak in their native tongues as well as in English.

At home in Auckland, Matthias speaks Mandarin and German, and when he's at kindergarten or communicating with friends he speaks English.

Wang said Matthias was a very sociable kid and he so desperately wanted to join in on conversations, he was keen to learn all three languages.

"He can turn his implants on and off and sometimes if I'm talking to his brother he feels like he is missing out so he asks me to 'get his ears'."

She said he was very fluent but his hearing problems created challenges - something Wang's oldest son didn't have to cope with.

"He learns from listening but with Matthias he has to make an effort. At least once a week I have to sit down with him for over an hour for Mandarin reading time and he really has to concentrate," she said.

Berndt said being deaf doesn't have to restrict kids from living a normal life.

"Because Matthias was able to get cochlear implants, he no longer has to miss out."

Wang said Matthias turned to her after the operation and said "I can hear the birds" - and that brought a tear to her eye.

"High frequencies like the sound of birds were usually hard for someone with cochlear implants to pick up but he did."

It aims to give deaf children with cochlear implants or hearing aids the ability to fulfil their potential and live an independent life in a hearing and speaking world.

A Givealittle page has been set up to help raise more than $180,000 to go towards the Hearing House and the Southern Cochlear Implant Programme.