2 Comments
New Zealand's managed isolation and quarantine facilities are under "extreme stress" and unable to respond to increasing demands as more Kiwis return home, a review has found.

Air Commodore Darryn Webb and Housing Minister Megan Woods - appointed the minister in charge of the facilities - announced the outcome at Parliament today.

Woods called it a system under stress, while Webb said it was under strain.

He said the system needed to be ramped up to meet demand. Demand continued to grow, the system was complex and they needed more resources for things such as tests and to communicate with returnees, Webb said.

The audit also said there needed to be better oversight of passengers as they were transferred from the airport to managed isolation or quarantine facilities.

It said an immediate review of the policies of various Government agencies regarding the wearing of personal protective equipment was also required. Different entities appeared to have different policies about the wearing of PPE.

The recommendations were among several from the audit commissioned over a week ago by Webb, who has taken over the MIQ facilities. Prime Minister Jacinda Ardern ordered the review on June 17.

Woods said a range of improvements were under way in response to the rapid review, which was conducted by senior officials from Defence Force, Corrections and Police.

Woods called it "a system under stress".

She said there was no "play book" for this type of pandemic and that no system was going to be perfect. She said they could never guarantee it would be fail safe but the enhanced measures" would ensure it would further reduce risk.

The minister said New Zealand had the strictest isolation measures in place that they were aware of. 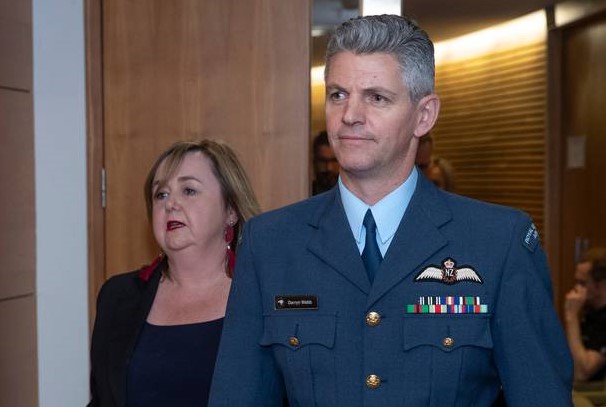 Air Commodore Darryn Webb, who has put in charge of the managed isolation and quarantine facilities, with Cabinet minister Megan Woods. Photo: NZ Herald
So far 22,000 people have been through managed isolation and she believed the facilities had done their job stopping people at the border. There were currently 6000 people in quarantine and she expected that to rise to 7000 people.

They planned to separate people in isolation so they would not come into contact with members of the public and that included using the old Jetstar domestic terminal.

Woods said they would be making sure a 12-day Covid-19 test was a priority so they could increase the turnaround and people leave at the end of the two weeks.

Webb said to say the system needed to be finely tuned was an understatement.

"This system relies on those returning New Zealanders understand and abide the rules."

The Government would be increasing the resourcing of on-the-ground defence staff and 238 defence staff were already supporting the system.

He said they were also ensuring consistent operational delivery no matter what facility people were in.

There would be a formal system of communicating with returnees before they departed, at arrival and throughout their stay. They hoped this would help reduce some of the negative behaviour they were responding to in the facilities.

People would not be allowed to leave managed isolation facilities until they returned a negative Covid test which would be taken on day 12.

Woods said they weren't satisfied the processes in place were robust enough yet to re-allow exemptions.

"I don't think anyone needs reminding about the stakes we are attempting to protect here."

She said while they had empathy for people's circumstances, they also had a job to do in protecting New Zealanders.

Webb said they would own the system around how people granted exemptions were transferred from isolation and how they could be managed outside of isolation.

Woods said it was a system that had worked in making sure Covid-19 had not left the isolation facilities.

She said the former system had worked in terms of stopping the spread of the coronavirus in the community.

Webb said there were 20 flights a week and now it was 30 and growing. Currently, there were over 4000 people in managed isolation and the facilities were now in four different cities.

The Government had 6500 beds available for isolation and the criteria for facilities were high. He said they currently had a week capacity and were looking to extend that to 14 days.

The Government was also wanting to work with the airlines to help manage the demand and to ensure that when people booked a ticket there would be a bed ready for them.

Woods said they didn't want to stop New Zealanders' ability to come home, but they did need to smooth demand.

She said they needed to make sure no one was leaving facilities that would put New Zealanders at risk, but it did rely on those people "wanting to rejoin the team of 5 million" to make sacrifices - such as isolating for 14 days - that people here had already made.

Webb said they didn't always have certainty on who was coming into the country until they boarded the plane and the government's current accuracy was 7 per cent, give or take.

Woods said everything going into the isolation facilities was checked first and she was not aware of any illicit substances going into the facilities. She also asked the large number of people still coming back to New Zealand to "do their bit" too.

Webb said they had strengthened Police presence at the Jet Park quarantine facility in Auckland. He said ideally they were trying to match carefully the hotel level support, DHB level support and all of government level support. He said having facilities in fewer areas was the preferred approach.

Woods said they were confident they now had the ability to carry out Covid-19 testing on both day 3 and day 12.

Webb said they can always do better regarding communications and it was key they spoke to hotel management and the airlines.

The MIQ facilities are responsible for isolating arrivals to New Zealand for 14 days and are doing so in 21 hotels in four cities: Auckland, Rotorua, Wellington and Christchurch.

A Cabinet paper on the report says that some arrivals from Australia were unaware they would be even be going into managed isolation.

Woods said the report showed that the system was not broken but that it did need additional resourcing to respond to increasing demands as New Zealanders returned home from global hotspots.

"The Ministry of Health will be increasing the number of clinical and non-clinical staff, such as nurses, at each facility to ensure health check, testing and other health services are consistently delivered to the standards required."

• An increase in personnel resourcing and capabilities to provide greater staff capacity and respite;

• Clarify lines of accountability (including through possible changes to the relevant legislative instruments), and amend delegations to enable appropriate decision making;

• A comprehensive audit of policy, practice, procedure and documentation with a view to achieving standardisation and simplification across the MIQ system;

• Increase oversight of the transfer process of returnees between airside activity to MIQ facilities;

• Tightening the MIQ system to align the reporting of non-compliance with supporting enforcement measures;

• The development of a process to regularly account for returnees at MIQ facilities;

• Exploring opportunities to improve the testing/analysis process to ensure that results are reported on day-13;

• Ensuring that actions arising from this report align with appropriate recommendations from the MoH assurance review;

• The immediate review of PPE policy throughout the MIQ process and the communication of policy settings to all stakeholders.

I think "under development" would be more accurate than "under stress." This is a world leading system, there is no one for them to follow. They are not just building this aeroplane in the sky, they are inventing it in the sky. There are bound to be problems, it would be entirely unreasonable to expect a world first system to be put in place under extreme duress, and for everything to go perfectly.
Just be thankful that NZ isn't being run by maga hat wearing tRump follower or NZ would today be in the exact same situation as the USA.

the right wing ideas of business solves everything motto have had the worst results worldwide not just the USA, look at Brazil and the UK for perfect examples. Without healthy living populace there can be no decent business except online retailing etc.thank goodness we had a great leader in power or we would of been screwed.