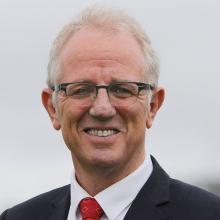 O'Connor told Heather du Plessis-Allan on NewstalkZB today that Ardern's handling of Curran's decision to resign on Friday "could have been done better".

"Yeah it could have been done better, I don't think anyone will disagree with that. I'll tell you what, it will be done better next time," he said.

He said there was "a little bit of confusion about interviews on the Friday morning - yip, can't have that".

Ardern said on Friday morning that she had not asked Curran to resign, and did not disclose at the time that Curran had already resigned the night before.

"We've got a Prime Minister who is actually genuinely trying to be a more humane, take the nastiness out of it. If the commentators aren't going to let her, if the Opposition isn't going to let her, we'll end up going down the exact same way the Australians are," he said.

A spokesman for Ardern confirmed that Ardern gave O'Connor "a stern phone call" about his comments tonight.

"She has relayed her disappointment to Greg O'Connor around his remarks, and he has affirmed his support and confidence in the Prime Minister," the spokesman said.

O'Connor was president of the Police Association for 21 years before replacing Peter Dunne as MP for Ōhāriu last year.