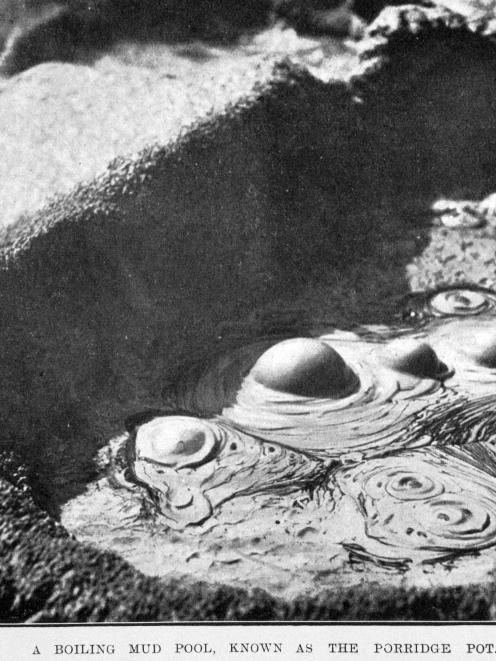 Boiling mud pool Porridge Pot, Rotorua — Otago Witness 27.12.1921
A plea for the serious consideration of expanding spa work in New Zealand is made by the Government Balneologist at Rotorua in his annual report. He states: “It has been admitted by the world’s leading hydrologists that our mineral waters are without rival; and I need to point out that with the increasing number of nervous disorders and an accumulating prevalence of fibrositis (so-called rheumatic affections) everything should be done to make our spa the most valuable and efficient in existence; moreover, since 1914, with the knowledge gained by war experience, hydrotherapy has become an exact science capable of effecting cures that were previously considered impossible. Therefore, pari passu with the expansion of the work of the Health Department, I would urge that the work of our spas is as valuable as that of anybranch of medical science; and, in view of the means in hand, spa work in New Zealand should be considered in the light of a national necessity.’’

Wellington: The New Zealand Aero Transport Company’s  DH9, flying from Invercargill to Auckland, arrived at Trentham at 12:25pm yesterday, after an entirely satisfactory flight from Timaru. It was intended to fly straight through in one day, but the flight was interrupted in Timaru on account of the unfavourable weather reports from Wellington. The machine left Timaru at 8 yesterday morning, passed Ashburton at 8:29, Christchurch at 8:58 and arrived at Kaikoura at 9:55. After filling with petrol, the flight was resumed at 11:05, and Blenheim was crossed at a height of 6000 feet at 11:50. The coast was passed at noon. It took only 8 minutes to cross Cook Strait, and the machine passed over Wellington at 12:15 and landed at Trentham 10 minutes later. The total flying time from Invercargill to Trentham was roughly 3 hours 20 minutes. Leaving Trentham at 1:52pm the machine flew over Otaki, Feilding and Wanganui, and thence to Hawera, arriving at 3:25pm and leaving at 4:05pm for Mokau. Thence it followed the west coastline. The DH9 arrived in Auckland at 6:08pm, the trip taking three hours, 36 minutes actual flying from Trentham, and eight hours 53 minutes from Invercargill. Mr Wigley, managing director of the New Zealand Aero Transport Company, is of the opinion that it is quite feasible to run a daily passenger flight from Bluff to Auckland.

Wellington: The annual report of the Education Department, dealing with secondary schools, says that a total of 7214 children, or 71 percent of the 10,026 children who left the primary schools in 1919, entered secondary education. In addition to the children enumerated, 2169 proceeded from the primary schools to evening technical classes. The average length of stay of boys at secondary schools is two years and nine months and of girls two years and seven months. The report states that the figures are not quite so good as those of the previous year, there being no apparent tendency to lengthen the period of stay at secondary schools. Little else can be expected unless compulsion is exercised while the age of the pupils remains as high as it is. It is found that the average age of entrance is 14 years, three-quarters of them being between the age of 13 and 15 years. It is clear the most effective method of increasing the period of secondary education is to lower the age at which it is entered upon.