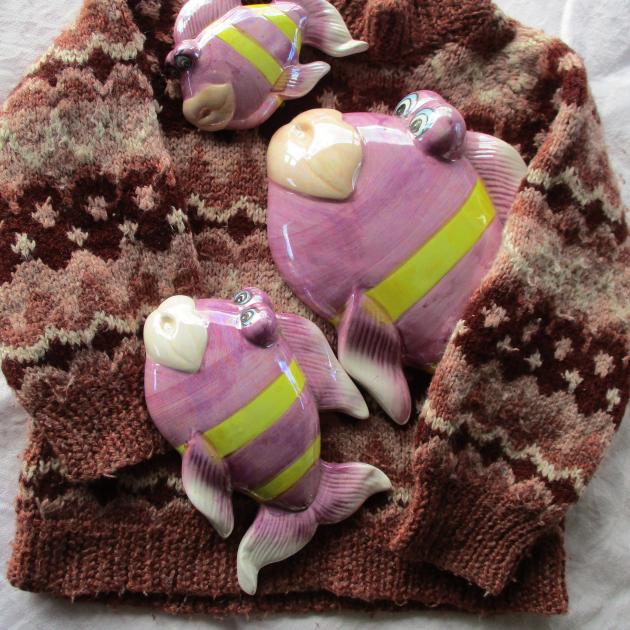 Ceramic fish and an old jersey snuggle up after removal from the junk room. PHOTO: ELSPETH MCLEAN
I would have screamed if I thought it would do any good.

When I ventured into the junk room, I was being assailed by yet another radio interview about shedding unnecessary possessions.

Is it just my overworked lapsed Catholic guilt or has there been a surfeit of media coverage recently encouraging us to feel we are letting the side down and destroying the planet by keeping too much stuff? A few years back Marie Kondo was urging us to chuck out things unless they sparked joy. Now, those of us who are a bit long in the tooth but still more or less in possession of a full set of marbles are supposed to be scurrying about sorting out our stuff so our offspring don’t get landed with that horror on our death. It even has the snappy title "death cleaning".

A cynic might think it is all to do with a forthcoming New Zealand television programme where a fairy, or maybe a frolic of fairies, comes into some family’s hopelessly cluttered life and sorts it out so they can all live happily ever after. Oh yes, believers.

The best I might have hoped for from letting rip with an ear-piercing shriek would be it shattering one or all three ceramic fish swimming in filth on the junk room windowsill.

Possibly, there were once four of these delightful creatures. I won them in a hockey quiz night raffle well over a decade ago. My recollection is that the woman who contributed the prize wanted to keep them for herself, an idea I was keen to support, not feeling the need to add googly eyed mauve-striped fish to my decor. Her husband was quick to rule it out. I got the impression she may have had a collection of similar items waiting for a chink in his resolve so they could finally find a place to soar or swim.

There is no reason for me to have kept them, and no doubt the decluttering gurus would be appalled.

I was in the junk room to see if I could find a son’s old K’Nex construction bits and bobs so he can have a nostalgic play when he comes to stay this weekend. (When I visited him in Invercargill a few weeks ago, he asked wistfully if I still had them. I thought I probably did.)

Making my way to the old toy box, risking an ankle injury at the very least by wedging a foot between an old stereo and another son’s defunct computer, I then had to move someone’s heavy backpack and a baby bouncinette, and climb over a bag of recipe books, culled during one of my clean-up attempts, but not yet removed from the premises. Another black mark from the gurus.

Sidetracked by a box of children’s books, I picked out a few I thought my 7-year-old granddaughter, a voracious reader, might enjoy. I also found an old favourite for the younger grandchildren — Noisy Nora, about a notoriously loud young mouse who is always being told to be quiet and which includes the politically incorrect refrain: "Nora!" said her sister, "Why are you so dumb?". Rosemary Wells got away with that line in 1973 but would she now?

On a nearby shelf, I noticed my first foray into Fair Isle knitting — a jersey made for the First Born, probably about 37 years ago. I am amazed I ever had the patience or inclination to do that with a toddler and a baby in tow. I wonder if the FB might like it for his daughter when she is a bit older.

Eventually, I located the K’Nex, carefully set aside in two plastic containers. I had no memory so much had avoided being sucked up the vacuum cleaner.

Despite my triumphant finds, I know there is plenty of stuff in the junk room which I cannot justify keeping. Occasionally, I clear out a box or two.

I feel vaguely virtuous for a couple of minutes but the lazy, inconsiderate part of me is never far away, suggesting if I die before doing more I will be deaf to any criticism for my inertia.

Putting it off is discouraged, presumably because you might become parted from your marbles or inconveniently die.

My sister-in-law tells me even 10 minutes a day spent sorting stuff is supposed to be useful. Really?

In the junk room it takes at least 10 minutes of risking life, limb, avalanche, and ACC claims to get anywhere near something to sort.

Perhaps I could start by offering the ceramic fish to my fellow hockey mom.

Her husband may never speak to me again, but if it sparks joy in her, shouldn’t he be grateful?

Leave it. Your old stuff, if not already on the desirable-retro list fetching stupid money on trademe, will be by the time you fall off your twig.
Or it's your kids' joy-sparkers. The chipped cup you always used for measuring when you were baking, you can't guess how good it feels to use Mum or Nana or Uncle's things, incorporate them in daily life. You don't know now which of these worthless items carry a special memory for your family and which they'll hurl into the skip.
Clutter is layers of a life. Layers of hobbies, past obsessions, projects to be returned to when there is more time, evidence of a rich spirit.
Those perfect homes, not even a bookcase in sight, acres of glass and carpet and never a tasteless precious gift on a shelf from someone loved - how dispiriting!