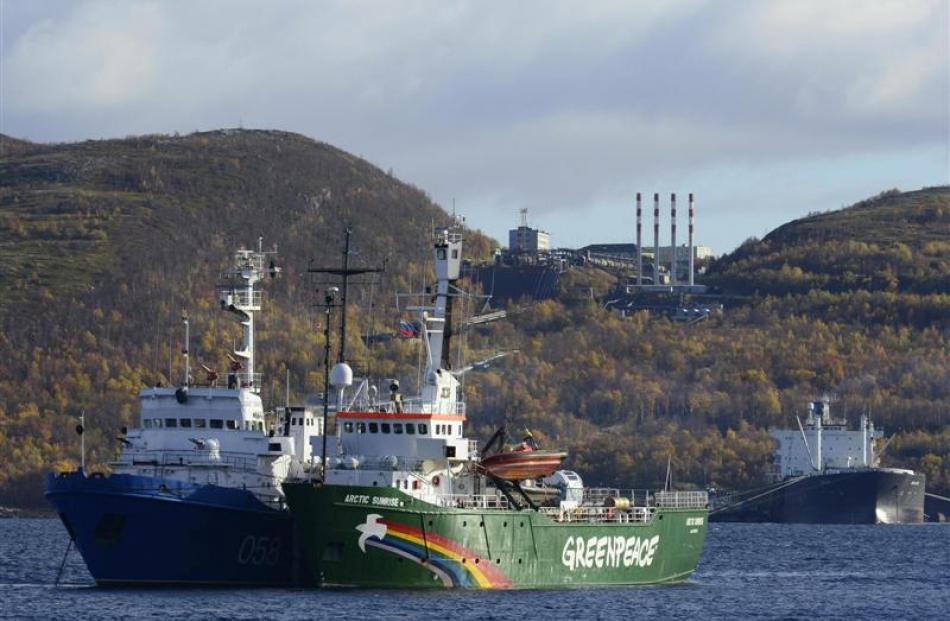 Greenpeace's Arctic Sunrise anchored outside the Arctic port city of Murmansk before protests at an oil platform and the arrest of the protesters. Photos by Reuters. 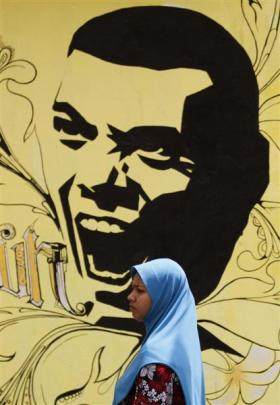 A Muslim woman walks past presidential candidate Mohamed Nasheed's election campaign poster in Male in September. Voters elected Mr Nasheed last month, after he was forced from office in 2012. But the latest election is being rerun.

Short term beats long term most of the time, even when people understand where their long-term self-interest really lies.

Take, for example, that well-known pair, Russia and the Maldives.

Five years ago, it was hard to find senior people in the universities and scientific institutes in Moscow who were even willing to discuss climate change.

But the great heat wave of 2010, which killed one-third of the Russian grain crop, seems to have changed all that.

It was Russia that insisted on putting a reference to geo-engineering, the highly controversial array of last-ditch measures to combat global warming, into the last paragraph of the Intergovernmental Panel on Climate Change's recent report.

On September 18, the Greenpeace ship Arctic Sunrise stopped near the drilling platform Prirazlomnaya, the first rig to drill for oil off Russia's Arctic coast, and launched four inflatable boats.

Their aim was to hang a banner on the platform denouncing Russian plans to exploit the oil and gas reserves of the environmentally sensitive Arctic, especially since burning all that extra oil and gas will speed up the warming process.

There were no weapons aboard the ship, and Greenpeace's protests are always nonviolent.

None of the protesters tried to climb up the legs of the platform or damage it in any way.

But armed Russian security forces abseiled down from helicopters and took them all prisoner.

The ship and all its crew were arrested and taken to the nearest Russian port, Murmansk.

A month later, all 30 crew members, volunteers who come from Britain, France, Canada, Russia, Brazil, New Zealand and 11 other countries, are still in prison. Half of them have already been charged with ''piracy''.

It sounds ridiculous, but piracy carries a prison sentence of 10 to 15 years, and the Russian State is deadly serious.

The crew have all been refused bail, and it will probably be months before they even stand trial.

The Russian State has a long tradition of reacting badly when it is challenged, and the platform belongs to Gazprom, a state-owned firm, but even so this is an extreme overreaction.

Besides, knowing how hard climate change will hit Russia, why did Moscow let Gazprom start drilling in the Arctic seabed at all?

Because Russia's relative prosperity in the past decade has depended heavily on exports of oil and gas.

Because President Vladimir Putin's rule depends on the continuation of that fragile prosperity.

And because Russia's onshore reserves of oil and gas are in decline.

Russian scientists are well aware that the frozen seabed of the Arctic Ocean is already thawing and releasing huge plumes of methane gas that will accelerate warming further.

Mr Putin is concerned enough about climate change to spend serious diplomatic capital on getting geo-engineering into the IPCC report.

But warming is a long-term (or at least a medium-term) problem, and his political survival a short-term one.

Short term comes first, so drill away, and if people protest against it, charge them with piracy.

And if you think this is as stupid as politics can get, consider the Maldives.

The Maldives are several hundred tiny islands in the Indian Ocean where most of the land is only about a metre above sea level.

As the sea level rises, most of the country will simply disappear beneath the waves.

You would think that the prospect of national extinction in two generations would concentrate anybody's mind, and in the Maldives it did - for a while.

In 2008, the long-ruling dictator Maumoon Abdul Gayoom was ousted in the islands' first free election by Mohamed Nasheed, a young politician who put great emphasis on fighting climate change.

Mr Nasheed knew that his own country's actions could have little direct effect on the outcome: China emits about 2000 times as much carbon dioxide as the Maldives.

But he also knew that the extreme vulnerability of the Maldives gives its decisions a high publicity value, so he pledged to make it the world's first carbon-neutral country.

He even held a Cabinet meeting underwater, with all the ministers in scuba gear, to dramatise the country's plight.

Then, early last year, Mr Nasheed was overthrown in a coup by senior police officers closely linked to the old regime.

International pressure forced fresh elections early last month and Mr Nasheed came in well ahead of the other two candidates.

Various interventions by police and judges linked to the former dictator have complicated the issue, and the election will now be rerun early next month.

Mr Nasheed will doubtless recover the presidency in the end, but here's the thing.

In the whole election campaign, he didn't mention climate change once.

Neither did the other candidates.

This is a country full of people whose grandchildren are going to have to live somewhere else because the whole place is going underwater, and they STILL don't want to hear about climate change.

You can't just blame the politicians for the neglect.

It's just too uncomfortable for people to stay focused on the issue for long.

And by the way, opinion polls reveal that a majority of Russians approve of the piracy charges laid against the Greenpeace crew.