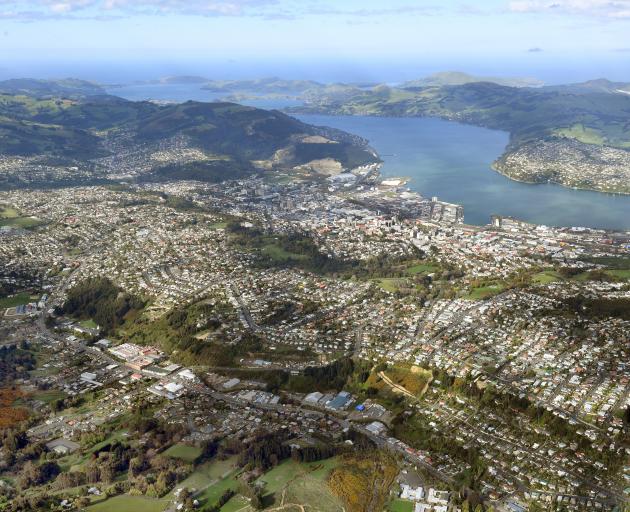 What does the future hold for Dunedin? PHOTO: ODT FILES
The Dunedin City Council needs to deliver a city that people aspire to live in, writes Cr Sophie Barker.

Do you remember the nervous anticipation of waiting for your school report? What were your marks? Had you passed or failed? Top of the class or bottom? And what would your parents read between the lines of the carefully phrased teacher’s comments?

Well, the Dunedin City Council received its report card earlier this month. And it was one that won’t result in a pat on the head, a treat meal out or $10 for an A pass. D for dismal, a 44.5% score for KPIs achieved with mayor and councillors’ performance satisfaction plummeting from 40% to 25%

So how does this make me, as a councillor feel?

I’d heard, months ago, that the annual ROS (Residents Opinion Survey) had slammed mayor and councillors’ performance. I asked numerous times when we were going to receive the report, but councillors often don’t get reports till others decide. So I feel both angry and ashamed. Angry that annual results received in July reach us in December so we miss nearly five months of addressing the issues and ashamed to be part of a council that receives such dismal marks from its residents.

What does the DCC Annual Report measure?

Finances of course, with a $17 million surplus instead of a $3 million budgeted unbalance - forecasting 2020-21 back in mid-2020 was a perilous leap.

The main measurements are levels of service. Put simply, this is what residents and ratepayers are getting for their money. About 100 of these are reported on. Some are compliance measures e.g. no bacteria or protozoal [presence] in the water, abatement notices, response times and some are satisfaction measures e.g. percentage of residents satisfied with water pressure and quality.

Apart from a sterling 100% success in stormwater, plus sewerage and property performing better compared to 2019-20, DCC performance with roading and footpaths, water, reserves and recreation, libraries and museums fell. Regulatory, community and planning, economic development and governance were equal, but when waste management’s equal is 0 there is a huge concern.

In my experience in business, surveys are gold and KPIs are goals. The customer sits centre and measuring success gives us objectives to strive for. Without happy customers you don’t have a business, and without striving for achievement you decline and implode.

Is Dunedin in decline?

Our DCC report card KPIs say things aren’t great. From achieving 61% two years ago to the current 44.5%, a steady decline with satisfaction measures shows that residents are unhappy with our performance, that we’re falling behind in perceptions of Dunedin, especially with a sense of community, down 29%. I asked staff during the meeting if we were benchmarking our results with other cities. Is the decline in satisfaction just Dunedin’s? Or is there a general decline in New Zealanders’ satisfaction — with their councils, their government, their lives? This question remains unanswered. With some KPIs hinging on visitor numbers, some on roads being maintained and some on how people feel, we need to consider the wider world we live in. The world of a pandemic, of lockdowns and rapid change. A world of ruptured supply chains, closed borders and mental stress.

In the meantime, as I said in my speech at the meeting, we need to own the elephant in the room, the 25% mayor/councillor satisfaction result and need to do better with the C word. Communication.

The morning of the meeting, I met a man in a cafe who had filled out the ROS survey, he was feeling angry and frustrated with council too. He asked the question “Are you a councillor?” then filled me in with the reasons he had given us such bad marks. I definitely related, heard and understood his frustrations. Who hasn’t come up against a wall of bureaucracy when trying for a simple fix, felt annoyed at perceived priorities that don’t address basic issues and thrown their hands up in despair? While sometimes confronting, it’s a gift to hear from residents first-hand their views on DCC performance.

What does the future hold for Dunedin? Will we conquer our KPIs? Will residents give us rave reviews?

It’s in our hands as councillors, as residents’ representatives and governors, to steer the ship safely, to be Apollo 11 not Titanic; to steer for the stars and avoid icebergs. To deliver the city that Dunedinites aspire to live in.

The biggest report card comes next October, when elections are held. Then people really tell us how they feel — with their votes. Democracy is a treasure which shouldn’t be squandered. I urge residents to engage with council and their councillors so we can do our best for our city. Our meetings are livestreamed so you can watch your councillors perform their roles. Our contact details are on the DCC website and we are often out and about. Come chat with us and give us your own Residents Opinion Survey.

Dear Councillors, thank you for the work you do but please dial down the debt and virtue signaling, thank you.

That is, don't do anything to enhance the Community.

Cr Sophie Barker, one of the councillors who knows how to run a successful business, says "I urge residents to engage with council and their councillors so we can do our best for our city."
That may work with her and the other councillors who didn't come from "sheltered workshops" where income was very VERY loosely tied to performance.
Too many of us are used to our voices being ignored. We are ignorant, They know what's best for us. Transport and parking are the glaring examples. We know the practicalities of getting, not only from A to B but also in the same trip to C, D and E. Of finding a park that gives us enough time to do D before proceeding to the next thing on the list. Not being able to leave children in the car, it takes about 5 minutes to remove small child , transfer to carrier,stroller to do the shopping, & replace in car seat yet 5 minute parks are taking an increased number (reduced) of the parking spaces. Retail flight from the CBD should be a visible clue, though retailers' own words fell on deaf ears. It's my earnest hope that the impractical councillors will be voted out along with their Chief failure, next October.

Dunedin is a place people aspire to live. 120,000 people have decided to live here. Do we want to be a city of 1 or 2 million? For most people that would be a big no.

The fact that a survey undertaken in July doesn't get released until December should be a red flag for anyone. Why 6 months hiding the news? Was the delay an attempt to "massage" the results? Or is that simply the standard DCC admin sets for anything these days. Why should DCC not take as long as they please, who cares what the public wants?

And of course the mayor and his cohort simply can't believe citizens don't want roads closed, traffic blocked or be forced to walk or ride a bike everywhere. The Mayor insisting that if 12 year olds were surveyed his rating would improve simply shows how deluded he is. Roll on October.

I think the value of governance is over-hyped, and a career in politics should be illegal, but there is a saying along the lines that "people get the government they deserve" So everyone who has ever grizzled about the councilors and mayor - please do a better job next time you vote!

Well said Sophie - too bad there are not many, more like minded people around you. Perhaps you might consider running for Mayor at the next election - at least we know you have a backbone.

Sadly the bad report card is of the council's own making. Neither the councillors or the council staff listen to the ratepayers. They go their merry way, wasting money on things we don't want and not supporting or funding things we do want, like car parks, good transport (and not just buses and cycles). No concern is given to the safety of pedestrians as they ramp up expensive and badly designed 'shared' cycle paths and paint dots on the road. The mayor makes Judith Collins look popular. Come on, learn from your mistakes.

Sadly the mayor and his greens mates won't learn because they are convinced they are right. They are on a crusade to save us from ourselves and nothing else matters.