The problem of fanaticism 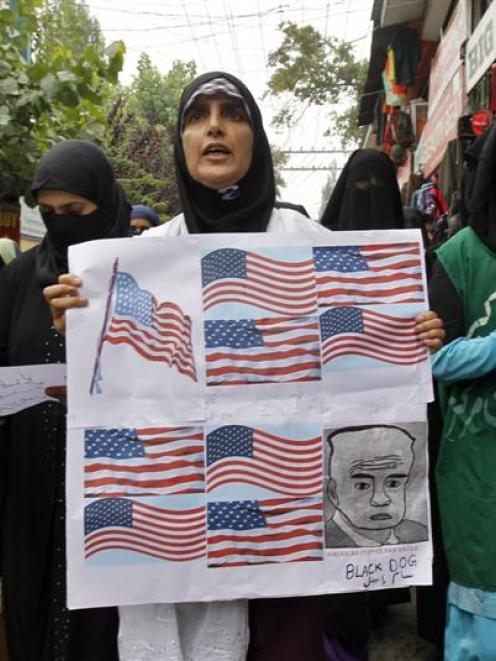 Yasmeen Raja (C), the leader of Muslim Khawateen Markaz, a Kashmiri women's separatist group, leads a protest against the "Innocence of Muslims", a film they consider blasphemous to Islam, in Srinagar September 17, 2012. Photo by Reuters.
The killings, embassy attacks and violent protests in the wake of excerpts of an anti-Islamic film made in the United States being broadcast online have reignited concerns about freedom of speech, religious intolerance and fanaticism.

The film, titled Innocence of Muslims, which reportedly mocks the prophet Mohammed, was said to have sparked a violent attack on the US embassy in Benghazi, Libya, last week in which ambassador Christopher Stevens and three other Americans were killed. Several people have died in other protests, which have spread to countries including Egypt, Sudan, Tunisia, Turkey, Yemen, Lebanon, Pakistan, Afghanistan, Indonesia and England. And, closer to home, violent clashes outside the US consulate in Sydney on Saturday resulted in six police officers and 17 others being injured. Australian Prime Minister Julia Gillard was appalled by a photograph of a child at the protest carrying a sign calling for people who insult the prophet to be beheaded, saying "this is not the Australian way".

World leaders condemned the violence in Libya. New Zealand Foreign Affairs Minister Murray McCully said this country was "shocked and saddened". US President Barack Obama called the killings "outrageous" and ordered a tightening of diplomatic security worldwide and withdrawal of non-essential staff from some embassies. Western embassies throughout the Muslim world remain on high alert.

Saudi Arabia's highest religious authority denounced the attacks on diplomats and embassies as un-Islamic. Libya's leader, Mohammed Magarief, said the Benghazi attack was planned by foreigners linked to al Qaeda and was not a spontaneous reaction to the video, citing the fact it came on the 11th anniversary of the 9/11 terrorist attacks in the US. "These ugly deeds, criminal deeds, directed against late ambassador Chris Stevens and his colleagues do not resemble in any way, in any sense, the aspirations, feelings of the Libyans toward the United States and its citizens," he said.

The US disagreed about the attack, with the American ambassador to the United Nations, Susan Rice, saying: "There's no question, as we've seen in the past with things like The Satanic Verses, with the cartoon of the prophet Mohammed, there have been such things that have sparked outrage and anger and this has been the proximate cause of what we've seen."

Certainly, the violence has reopened old wounds in relation to past events - and provided a catalyst for anti-Western sentiment - in the Muslim world.

An Iranian religious foundation has increased its reward for the killing of British author Salman Rushdie, who was condemned to death in 1989 by Ayatollah Ruhollah Khomeini, Iran's late leader, over his novel The Satanic Verses, saying its depiction of the prophet Mohammed was blasphemous. The reward now stands at $NZ4 million.

Foundation head Hassan Sanei said if the original sentence had been carried out, "the later insults in the form of caricatures, articles and the making of movies would not have occurred".

Whether that is the case is debatable. But the scale and fury of the protests is frightening and seems to many impartial observers to be well out of proportion to the original offence. It is understandable Muslims will be offended at religious intolerance directed at their faith. But that should be put in context. An individual video, or book or cartoon, which may be the product of one or several individuals or even organisations, is not necessarily representative of a whole nation's thinking. To seek a free-for-all retaliation on any Westerner is another thing entirely - and only further increases the divide when it comes to religious tolerance and understanding.

Of course, with the West's proud right to freedom of speech comes responsibility. Authors of such works need to consider their implications - perhaps especially given today's technology which delivers a worldwide audience to the doorstep.

But innocent people have been killed in the wake of the recent blind fury. In the case of the slain US ambassador, a man working towards bridging the gap between cultures in post-Arab Spring Libya has been slaughtered. Perhaps the biggest tragedy is such actions - and calls for indiscriminate murder by offended Muslims - will do nothing to increase understanding of Islam.