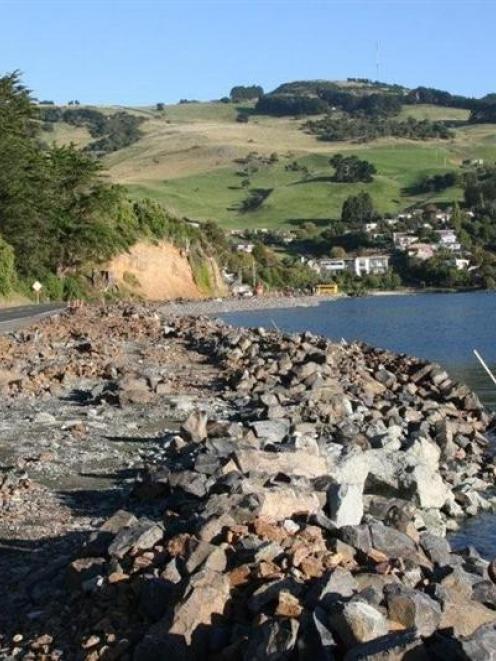 "The reclamation has gobbled a lot more of the intertidal zone - two to three times as much." Photo by Neville Peat.
The widening of Portobello Rd between Macandrew and Company Bays will become a superb facility for visitors and locals. But what of the negative impacts on the ecology of the disappearing intertidal zone, wonders Neville Peat.

The long-term project to create a walkway and cycleway all the way to the albatrosses on Otago Peninsula, by widening Portobello Rd and Harington Point Rd, appears to be a win-win work in progress - no better demonstrated than along the 1.8km stretch of Portobello Rd from Macandrew Bay to Company Bay.

The finishing touches are being applied now.

An impressive new seawall of expertly-placed basalt rocks faces the tides and waves.

Consistent with the new sections already constructed at the Mission Cove embayment and Lower Portobello Bay, the Macandrew-Company Bay leg will gain three new non-vehicular corridors - two recreational/commuter cycleways, one on each side of the road, plus a wider walkway.

Bus stops are also incorporated at intervals, causing bulges in the reclamation.

The development will become a superb new facility for locals and visitors, and a major safety measure on a busy tourist route.

Who could possibly argue a downside? The fact is, though, harbour ecology has taken a hit.

Between Macandrew and Company Bays, the reclamation has pushed out into the gravel, cobble and boulder beaches, a productive intertidal zone inhabited by marine animals such as crabs and slower-moving species such as chitons, limpets and topshells.

When the tide is out, their table is laid.

A sizeable portion of it has disappeared now, and even more will be buried as the road widening continues over the next few years.

The suite of coastal permits applied for in 2005 by the Dunedin City Council to cover the project, and subsequently granted by the Minister of Conservation after an Otago Regional Council resource consent hearing, allowed for an average reclamation width of 2m and a maximum of 4m.

The reclamation has gobbled a lot more of the intertidal zone - two to three times as much.

Over a 100m length between McLellan and Porterfield Sts at Macandrew Bay I measured widths ranging from 9.5m to 11m.

In this section, the reclamation footprint appears to have buried up to 80% of the intertidal area.

Opposite Bayne Tce, presumably anticipating another bus stop, the reclamation extends to 9.5m.

Although the DCC plans did flag reclamation bulges of up to about 6m at bus stops, these numbers far exceed the permit conditions.

I am not suggesting the council dig up any part of the reclamation.

Who would? But in light of the huge contribution of marine life to the city's nature-based tourism industry - worth $100 million a year, according to one recent study, with albatrosses and yellow-eyed penguins the star attractions - something should be done to compensate harbour ecology.

The shore birds, crabs and shellfish need not be the losers through reclamation.

When the ORC consent commissioners questioned the cumulative effect on natural values in the harbour, the response was that material would be removed from under the footprint to form new rocky shore habitat on the seaward side of the reclamation.

For the completed section in Lower Portobello Bay there has been an attempt at moving rocky material outwards, and some ecological benefit might have occurred, but I have not noticed any comparable restoration between Macandrew and Company Bays.

Two questions arise as all this work progresses: 1.

How much intertidal habitat is being destroyed? It is an easy enough thing to measure.

My guess is that the Macandrew-Company Bay reclamation has buried a hectare of rocky shore habitat, the equivalent of nine quarter-acre sections. 2.

Could intertidal habitat be created to offset the losses and the cumulative effect of these reclamations? One condition of the permits provided for a marine ecologist to assess shoreline effects after completion of each stage.

In a report prepared after the Lower Portobello Bay section was completed, the ecological impact was reckoned to be no more than minor.

I would be surprised if the same could be said of the Macandrew-Company Bay leg.

The DCC should be thinking of some kind of mitigation.

Experts in coastal processes could advise on how to build intertidal reefs in the harbour to replace the lost habitat.

These new reefs, besides nurturing shorebirds, could also serve to soften the wave energy on new sections of the seawall, which, extending into deeper water, will inevitably take a pounding from storms in an era of sea-level rise.

The new reclamations are certainly lifting the carriageway but some storm waves have already washed over the work at Macandrew Bay.

During storms, Portobello Rd has regularly been flooded with sea water in this area, which is exposed to the longest fetch on Otago Harbour.

I have seen storm waves hurl spray across cars.

Perhaps a few built intertidal reefs, strategically located, could minimise such effects and keep the shorebirds happy at the same time.

> Neville Peat, author of the award-winning book, Wild Dunedin, and the photographic souvenir, Dunedin - A Portrait, is a former Otago regional councillor.