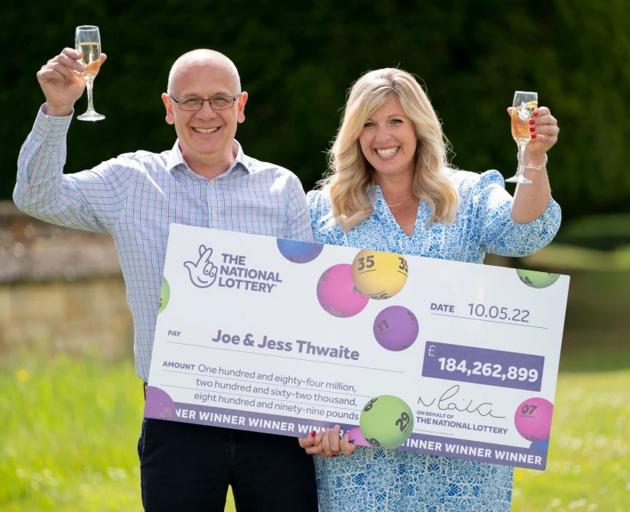 Britain’s biggest ever EuroMillions winners, Joe Thwaite and wife Jess, of Gloucestershire, celebrate after bagging a life-changing £184million. PHOTO: NATIONAL LOTTERY.
It might be hard to imagine a £184million lottery win but, as people increasingly struggle to pay bills, we can all indulge in more modest, daily treats. We smile at an unexpected windfall, and daydream all the harder when times are tough.  Rachel Cooke, of The Observer, writes.

I didn't plan to begin my Friday morning with a little light googling of new cars. I can’t afford to buy one myself. But having dived down this unexpected rabbit hole, I was at least able to confirm my hunch that Joe Thwaite, who with his wife, Jess, has just won £184million ($NZ357million) on the National Lottery, could — and doubtless will — do a lot better than the Skoda Superb Estate when he comes to upgrade his battered Hyundai.

According to What Car?, if space is a luxury, the Superb is indeed one of the world’s most luxurious vehicles. However, size isn’t everything. Road roar could be a problem. The Thwaites, newly released from the need to budget, as well as from the scorn of any Alan Partridge-types they may know, should seriously consider "a premium German or Swedish badge".

More than half a century has passed since Viv "spend, spend, spend" Nicholson and her husband, Keith, won (and immediately began to lose) the equivalent of more than £3m in today’s cash on the football pools — and yet, our fascination with those who become rich overnight thanks only to a ridiculous stroke of luck remains more or less undimmed.

Even stranger, perhaps, we continue to cling to the conviction that no good can come of such financial lightning bolts. You can’t buy happiness, we tell ourselves, even as we think of the most miserable couple we know, bound together only by the punitive cost of a separation.

In my newspaper, a picture of Jess and Joe Thwaites spraying an obligatory bottle of Champagne all over the invited photographers came with a helpful list of some of the wretched disasters that have, since the National Lottery’s inception in 1994, befallen its biggest winners.

Suffice to say that the bloke whose new swimming pool was invaded by squatters seemed to me to have got off quite lightly.

But alas, the truth is that money can buy happiness — or at least it can make the possibility of it vastly more likely (but a broken heart is still a broken heart). Economists in this area tend to talk of the meeting of "basic needs", something that makes the correlation between income and happiness strong up to about £60,000 a year, and weaker thereafter.

But more recently, the study of groups of lottery winners has revealed that, relieved of financial worries, they are also more content.

In 2019, two economists, Andrew J. Oswald, of the University of Warwick, and Rainer Winkelmann, now at the University of Zurich, even asserted that, according to their research, the more money someone won, the more pronounced the positive effect this was likely to have on their state of mind.

Additionally, neurologists have found that those who give a proportion of their ill-gotten gains away have increased activity in the reward areas of their brains, a fact that may help to explain why some people describe philanthropy as akin to an addiction.

We fixate on hoary stories of reclusive, drug-addicted Gettys, but the richest and most generous man I’ve ever met — I was seated next to him at a dinner at a museum to which his foundation regularly made major donations — exuded a serenity so palpable it seemed almost to be wrapped around him, like a shawl.

Do people spend more, or less, on the lottery when times are hard? We don’t know what’s happening right now, but my guess is that we’re spending more. During the last recession, in 2009-10, sales of both tickets and scratchcards rose, with the result that the Heritage Lottery Fund found itself with an extra £25m a year to distribute. We daydream all the harder when life is tough.

This cost of living crisis feels radically different to others, in the sense that the link between being in work and keeping your head above water seems to be all but utterly broken — a paradox that encourages not only fatalism, but fantasy, too.

If you can hold down three jobs, and still be on the bones of your behind, doesn’t logic — or the lack of it — dictate that a quick corner shop flutter might release you from this crushing half-life forever?

The struggle to pay one’s bills and to feed one’s family is painfully real for large numbers of people in this country. But the situation, in other ways, has an air that is crazily unreal; we are living in a satire so clunky and ill-written, we can hardly be bothered with it.

The day after the Thwaites announced their win to the world, Rishi Sunak, the man whose job it is supposed to be to help those in most need, if not to fix the economy, was revealed as one of the 250 richest people in Britain (he and his wife, Akshata Murty, have a joint fortune of £730m).

Tell me: in which do you feel most inclined to place your trust? In the EuroMillions draw, or in a man who, as if he’d bagged the jackpot himself, will be spending £13,000 a year to heat the new pool at his home in north Yorkshire?

Still, some ancient part of me persists in holding fast to the idea that — somehow! — money should be earned rather than won, and this is why I’m inclined to make Skoda jokes. I’m willing the Thwaites not to be sensible, the better to bolster my puritan narrative.

One thing about writing for a living is that sometimes, small, unexpected sums turn up: a piece, written long ago, is sold elsewhere; a tiny royalty arrives. Whenever this happens in our house, my husband, sounding even more Scouse than usual, says, gleefully: "Money for jam!" and looks about for the Champagne.

This isn’t really the case, of course — it’s not for jam: work was done, and usually it was pretty ill-paid work — but I always feel guilty. I can’t help it.

I think of D.H. Lawrence’s coal miner father who, on being told how much his son had been paid for The White Peacock, is supposed to have said: "Fifty pounds! An’ tha’s niver done a day’s hard work in thy life."

Then again, I suppose this is what separates the vast majority of us from those who currently run the country. Fifty quid, even now, is a bonus. We feel like swindlers, even when we’re as honest as the day is long.