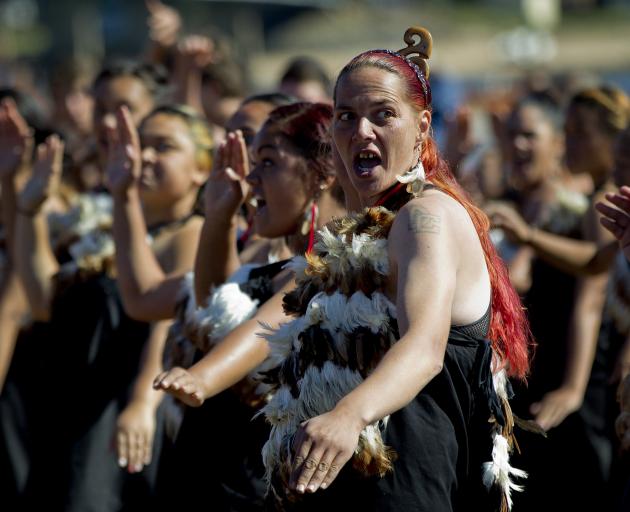 Waitangi Day can remind you of who you are. PHOTO: THE NEW ZEALAND HERALD
How do you celebrate Waitangi Day with its mix of hope and brokenness? writes Kerry Enright.

When you’re a New Zealander overseas, Waitangi Day can remind you of who you are. I loved celebrating Waitangi Day in Sydney in the years we lived there. Thousands gathered in venues across the city, usually in sweltering heat. The hangi was among the best I have tasted, the kapa haka was impressive and the music superb. Alongside the celebrating, groups gathered for sharp political analysis and discussion. It inspired us to fresh commitment and showcased Aotearoa to our Australian friends. The joy of the day fed our spirits.

Back home, it’s not easy to know how to celebrate Waitangi Day with its mix of hope and brokenness. I believe. though. that hope is the crucial ingredient to overcoming our divisions. The hope of Waitangi can galvanise our work for peace.

Last year, I saw the strength of the growing movement for Maori and Pakeha to live justly together. I spent two months next to my marae at the mouth of the Waikato River in the small town of Port Waikato. My daily routine included time at the coffee cart outside the famous Surf Club. In such a relaxed setting, people were friendly. I was often asked why I had come so far to such a small place.

The reason was to do with the history of my family in the area, Maori and Pakeha, and my work as a minister. An ancestor was the first Pakeha there, settling in 1830 when fewer than 300 Pakeha lived in Aotearoa. The conversation naturally turned to the area’s history.

People were almost invariably surprised to learn that in 1840, 1500 Waikato people had assembled there for the signing of the Treaty. Thirty-two chiefs had signed, including two of the few women signatories. It occurred in a location that was easy to identify but had no mark of the event.

The story piqued interest so I was usually asked to say more. After being signed at Waitangi, the Treaty was conveyed through the motu for others to sign. The official bringing it to the Waikato was delayed. Robert Maunsell, the local Port Waikato missionary, was worried the Waikato chiefs would disperse before the official arrived. He had a printed copy of an English version.

He translated it into te reo Maori and explained its meaning, then it was signed. By the time the official arrived three days later, everyone had left.

It would not have taken much to mark where this happened and nearly everyone to whom I spoke thought it an obvious step to take.

It was thrilling in such a casual setting to meet people who wanted to learn their history. Among them was a group of young people and teachers from my old secondary school. They were on the last day of a trip about the history of the area.

They walked where waka had been dragged and kayaked the stream that used to be the main thoroughfare to and from the Waikato.

Such a school journey would not have been possible but for the local hapu working for over 20 years to mark historic sites, including more than 50 former pa sites on the Manukau Peninsula.

They had been supported by archaeologists, local authorities and landowners who shared their commitment. So it was that, accompanied by kaumatua, students were able to learn the history that shaped how they now lived. That movement of rediscovery is well under way and deserves our full encouragement.

That spirit of hope also helps us acknowledge our brokenness. I hold together the hope of February 6, 1840, with the despair of July 12, 1863, when Crown troops crossed the Maungatawhiri Stream to start the Waikato War.

It was an unnecessary war justified by a lie that Maori were planning to attack Auckland. The war and subsequent unjust confiscation of land affected my family both in taking Maori land and crushing their spirit, but also enabling settlement from which other parts of my family benefited.

Waitangi Day can galvanise us in committing to such healing.

- Kerry Enright is the minister at Knox Church in Dunedin.