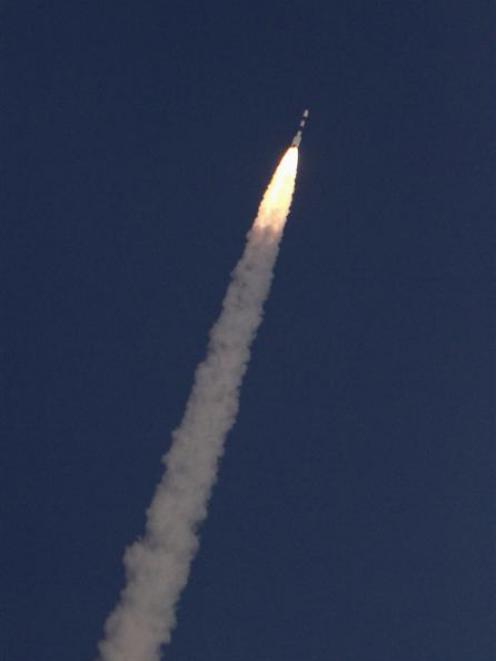 About two-thirds of the attempted missions to Mars have failed, many of them even before leaving Earth orbit, and most of the rest when they tried to land. Japan's only Mars mission failed in 1998, China's first try failed when the Russian rocket carrying its Mars orbiter into space fell back to Earth in 2011 - and so India seized the opportunity to be the first Asian country to go to Mars.

Fifteen months after the decision was announced by Prime Minister Manmohan Singh in an Independence Day speech from the Red Fort in Delhi, India's half-tonne Mangalyaan vehicle blasted off from the Satish Dhawan Space Centre on the country's east coast on Tuesday. It is already in Earth orbit, and within two weeks it will set course for Mars. Unless the Mars Curse gets it, of course.

There is something faintly ridiculous about India and China ''racing'' to be the first Asian country to reach Mars, but it's no more ridiculous than the Russian-American space race of the 1960s. Besides, to be fair to the Indian Space Research Organisation, the launch window for making a relatively low-energy transition to a Mars orbit will close before the end of this month, and it won't open again for more than two years.

Once Mangalyaan gets there, if it does, it will go into orbit around Mars and carry out various scientific experiments, notably a search for methane (an indicator of the presence of life) in the Martian atmosphere. At this point, various arrogant and/or sanctimonious people will point out that the United States' Mars rover Curiosity has already reported finding no methane on Mars, and that India is too poor to be indulging in such foolishness anyway.

The Indians will reply that Nasa, the US space agency, also said that there was no evidence of water on the Moon - until the Indian lunar orbiter Chandrayaan-1 reported the presence of water molecules in the lunar soil in 2008. They might also mention that if the United States waited until there were no more poor Americans before sending people to the moon, the first US mission might leave 50 years from now. Or maybe not even then.

The Indian space programme operates on an amazingly small budget (about $1 billion a year), but it has put dozens of satellites in orbit that provide practical benefits for earth-bound Indians: remote sensing, flood management, cyclone alerts, fishery and forest management, etc. But that's all in near space; the question is really whether long-range space exploration is a rational proposition.

Nationalism is part of the motivation behind every country's space programme, and while it has its comical side it does at least persuade the political authorities to provide the large sums that are needed. China is planning to land a rover on the moon next month, and is talking about a manned landing there by 2024. That will certainly speed up India's manned space programme.

Like the old Russo-American space race, the Chinese-Indian one will accelerate the development of technologies and techniques. It will fill some of the gap left by the loss of momentum in the older space powers, and some useful science will get done. But the biggest reason for welcoming the entry of major players in space exploration is the one everybody is too embarrassed to mention: the future of the human race.

Well, almost everybody. Elon Musk, the founder and CEO of SpaceX, the private company that aims to dominate the delivery-to-orbit service once provided by Nasa, actually wants to create a human colony on Mars in his own lifetime - and he is 41 now.

He is a serious player, whose large fortune (derived from his creation and subsequent sale of PayPal) is now devoted to manufacturing electric cars and building space transportation systems. Both projects are prospering, and he sees them as providing the financial and technological basis for pursuing his real goal: spreading human beings beyond this single planetary habitat while the launch window is still open.

Mr Musk was quite frank about that in an interview with Rory Carroll in The Guardian newspaper last July.

''The lessons of history suggest that civilisations move in cycles,'' he said.

''You can track that back quite far - the Babylonians, the Sumerians. We're in a very upward cycle right now, and hopefully that remains the case. But it might not.

''There could be some series of events that cause that technology level to decline. Given that this is the first time in 4.5 billion years where it's been possible for humanity to extend life beyond Earth, it seems like we'd be wise to act while the window was open and not count on the fact that it will be open a long time.''

I'll let you in on a little secret. That is a big part of the motivation (though a rarely admitted part) for half the people who work in any of the national space programmes, including India's. They value the science, and they may even revel in the glory from time to time, but that's what it's really about.