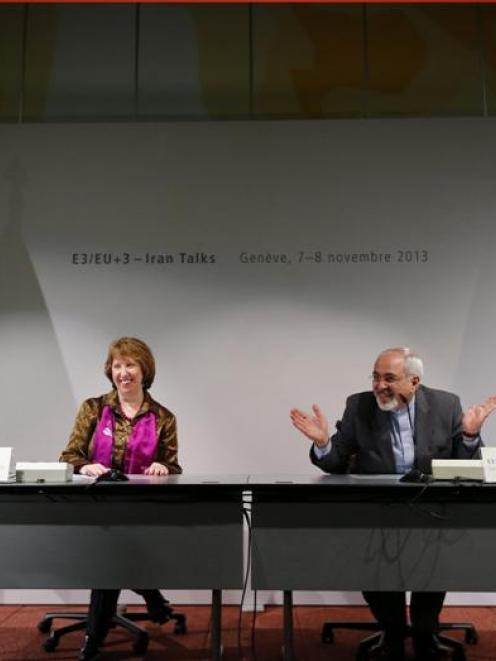 Iranian Foreign Minister Mohammad Javad Zarif (right) gestures next to European Union foreign policy chief Catherine Ashton during a news conference after nuclear talks at the United Nations European headquarters in Geneva last Sunday. Photo by Reuters.
What will the Middle East look like after Iran and the great powers that are negotiating over Iran's alleged nuclear weapons ambitions - the five permanent members of the UN Security Council plus Germany (P5+1) - sign a deal that ends the confrontation?

It's time to ask the question, because there is going to be a deal.

It didn't get signed in Geneva last weekend, but it came close. The only foreign minister at the Geneva talks on Friday was Mohammad Javad Zarif of Iran, but progress was so rapid that by Saturday almost all the foreign ministers of the ''P5+1'' - American, British, French, German and Russian - dropped whatever they were doing and flew in for the grand finale. Only the Chinese foreign minister was absent.

The grand finale has been postponed. There were just too many details to clear up in a single weekend, and a couple of sticking points that have yet to be resolved. But the date for the next meeting has already been set (November 20), and nobody went away angry.

''We are all on the same wavelength,'' Mr Zarif said.

''There is a deal on the table and it can be done,'' British Foreign Secretary William Hague said.

There are ''still gaps'' between Iran and some of the other countries present, Mr Hague said, but ''they are narrow gaps. You asked what went wrong. I would say that a great deal went right''. Even French Foreign Minister Laurent Fabius, the one who apparently dropped a last-minute spanner in the works, said ''we are not far from a agreement with the Iranians, although we are not there yet''.

Mr Fabius's demands were that the reactor in Arak, now nearing completion, should never be activated, as it would produce plutonium as a byproduct, and that Iran's store of uranium enriched to medium level (20% pure) should be brought back down to 5% to move it further away from weapons-grade (90%). Introduced into the talks at a late stage, his demands brought the proceedings to a temporary halt.

All the other Western powers closed ranks and insisted these were joint demands, but they were not part of the original draft agreement. Speculation was rife that France was acting on behalf of its customers (for French weapons) on the Arab side of the Gulf, notably in the United Arab Emirates, who view the deal under discussion with just as much horror as Israel does. But France can only delay things: the deal is going to happen.

One immediate consequence of the deal will be that Israel has to stop threatening to attack Iran. The threat was always 90% bluff - Prime Minister Binyamin Netanyahu's military chiefs would probably refuse to obey him if he ordered such an attack without American support - but now it will be simply ridiculous. Which will swing the spotlight back to Israel's treatment of the Palestinians.

Iran's economic isolation will also end, although it may take several years to unwind all the economic sanctions. The gradual return of prosperity in Iran will make the Islamic regime more secure (which may be the main reason the Supreme Leader, Ayatollah Ali Khamenei, authorised newly elected President Hassan Rouhani to negotiate the nuclear deal and end the confrontation.)

But the big question is whether a nuclear deal with Iran will cool the rapidly intensifying Sunni-Shia conflict that threatens to suck in the whole of the Fertile Crescent and the Arabian Peninsula. The answer, alas, is probably not.

The split is as incomprehensible to non-Muslims as the religious wars of Europe four centuries ago were to non-Christians. Mercifully, Sunni-Shia hostility has never reached quite that intensity but right across the Islamic world it has been getting worse for several decades now, and the eye of the storm is in the Middle East.

Iran is the sole Shia great power, so it is the focus of the fears of Sunni Arabs and the hopes of Shia Arabs. Moreover, given Turkey's semi-detached relationship with the region, Iran is in practical terms the greatest power in the entire Middle East.

For the past decade, Iran has been greatly weakened by the arms and trade embargoes the West imposed because of the nuclear issue. Once those embargoes are removed Iran will regain much of its former strength. This is already causing great anxiety in the Sunni Arab countries, especially those that face it across the Gulf.

Even quite experienced people in Washington and other Western capitals do not realise the extent to which the Sunni Arab countries of the Middle East thought their close ties with the Western great powers gave them a kind of guarantee against Shia power and how betrayed they feel, now they think that guarantee is being withdrawn.

Sunnis outnumber Shias almost 10-to-1 in the Islamic world as a whole, but in the smaller world that stretches from Iran and Turkey to Palestine and Yemen, the ''Middle East'', Shias make up more than a third of the population. The war is already hot and quite openly sectarian in Syria and in Iraq. In many other places (Lebanon, Bahrain, Yemen) it is bubbling just underneath the surface. It will get worse before it gets better.