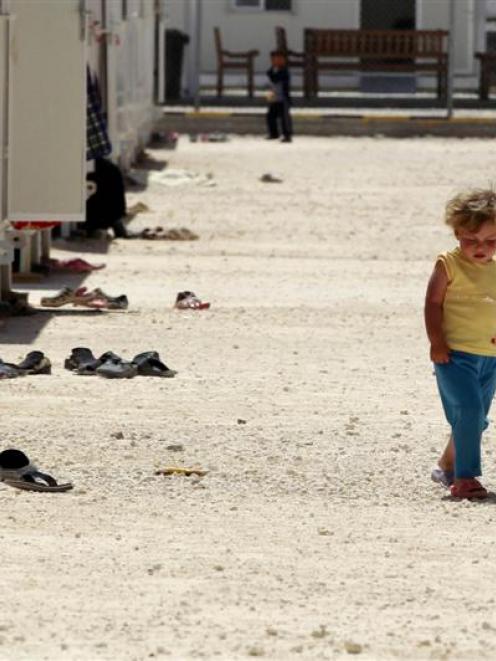 A Syrian refugee girl walks inside the Mrajeeb Al Fhood refugee camp, 20km east of the city of Zarqa, in Jordan. The camp has received about 2500 Syrian refugees so far, according to the Red Crescent Society of the United Arab Emirates. Photo by Reuters.
First of all, dismiss all those news stories saying that the Assad regime has started using chemical weapons against its own citizens, and that this has crossed a ''red line'' and will trigger foreign military intervention in Syria.

It is conceivable, though highly unlikely, that Assad's troops have used poison gas against the rebels. It is not credible that any foreign leader is going to order his troops to go into Syria and stop the war.

The ''evidence'' for the Assad regime's use of sarin (nerve gas) is flimsy, and it's easy to see why the opposition fighters might choose to fabricate it. Equally flimsy evidence about alleged ''weapons of mass destruction'' was used to justify the American invasion of Iraq. Why wouldn't the Syrian rebels have a go at the same game?

Moreover, there is no plausible reason why the Syrian regime would use poison gas. It would confer no lasting military advantage on the government forces, and the political costs of being caught doing it would be significant. But even if the accusations were true, it would make no real difference.

President Bashar al-Assad's Russian and Chinese supporters would be embarrassed, but they would not drop their vetoes at the UN Security Council and authorise foreign military intervention in Syria. And even if they did authorise it, there would be no volunteers for the job.

No Western government - nor any Arab government, either - is willing to put soldiers on the ground in Syria. Meddling in a civil war is rarely a good idea, and the Baathist regime's army could inflict very serious losses on an invader. Even imposing a no-fly zone would mean Western pilots dead or downed, because Syria's air defences are modern, competent and extensive.

US President Barack Obama may talk sternly about how the use of poison gas by the Syrian regime would be a ''game-changer'' - but he doesn't specify just how the game would change. He also spends much more time talking about how shaky the evidence is, because he has no idea what he would actually do if it were true. The one thing we can be sure of is that he would never send American troops in.

So if there is not going to be any foreign military intervention, when is the Syrian civil war going to end? Not any time soon.

From time to time the rebels overrun an air base here or a frontier post there. This is usually reported as proof that they are making progress, but half the time they lose their conquests back to the regime some weeks or months later. The front lines have scarcely shifted at all in Aleppo in the past six months, and the regime is even recapturing some of the Damascus suburbs that fell to the rebels last year.

The Syrian army lacks the numbers to hold down large tracts of countryside permanently, but it has never let the rebels close the main north-south freeway that links Damascus, Homs, Hama and Aleppo. Assad's divisions even reopened the highway linking Damascus to Tartus and Latakia on the coast recently, after many months of closure. If they are not actually winning the war on the ground, they are certainly not losing it.

Saudi Arabia and Qatar continue to feed weapons to the rebels, but not in quantities that would give them a chance of winning. This is probably because they have become increasingly nervous about the kind of regime that would replace Assad's dictatorship after a military victory. They wanted to replace Assad's secular regime with a government controlled by Sunni Muslims, but they do not want to put a fanatical Islamist regime in power.

That, at the moment, is precisely what an insurgent victory would produce, for the jihadi extremists of the al-Nusra brigades are by far the most effective fighters on the rebel side. The prospect of a radical Islamist regime has also convinced many moderate Syrians that they must prevent the fall of the Assad regime, even though they loathe it.

A year ago, the battle for Syria seemed to be turning into a straightforward struggle between the Sunni Muslim majority, some 70% of the population, and the various minorities, Shia, Christian, Alawite and Druze, who backed the Assad regime because they feared Sunni domination. It's probably more like 50-50 now, because many Sunni Muslims are equally repelled by the alternative of a radical Islamist tyranny.

There are no opinion polls to confirm this shift in Sunni opinion, but the evidence is there in the loyalty and the combat effectiveness of the Syrian army, most of whose rank-and-file troops are Sunni Muslims. So what should we hope for, in this almost hopeless situation?

The least bad outcome, at this stage, would be a stealthy military takeover of the regime that discreetly removed Assad and his cronies without abandoning the principles of the secular state, and then isolated the jihadis by reaching a generous peace settlement with the other elements of the rebel forces. How likely is that? Not very, unfortunately.