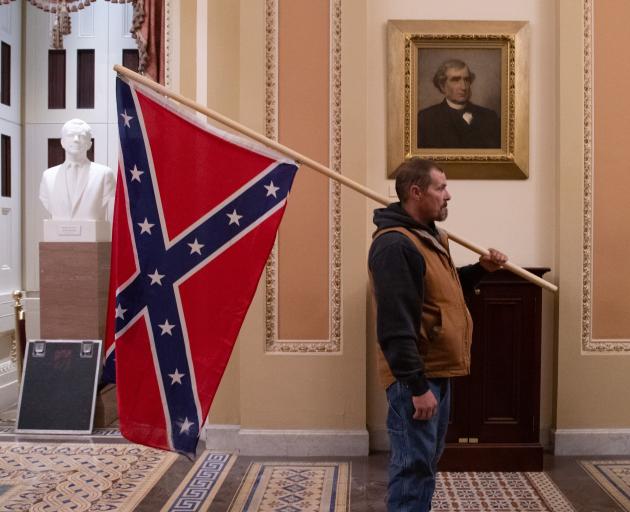 Kevin Seefried, a supporter of US President Donald Trump, holds a Confederate flag outside the Senate Chamber during a riot in the US Capitol on January 7. PHOTO: GETTY IMAGES
How long will it take for the United States to get back on track after the Trump presidency? Peter Matheson considers that question.

Can we begin to relax now that Joe Biden is taking over the US Presidency, and the Democrats control both the Senate and the House of Representatives, or does Trumpism represent a much more lasting threat?

Is Barack Obama, for example, correct that Trump was "not an outlier" but the logical end-product of long term thinking and tactics within the Republican Party?

The Princeton historian, Julian E. Zelitzer, has argued that as far back as Newt Gingrich (remember him!) the Republicans have embarked on polarising policies, ruthlessly bringing down the Democratic Speaker of the House, Jim Wright, in 1989. Moral conservatism has been linked to a vicious brand of character assassination, which was to be echoed later by the Tea Party and has become so familiar to us under Trump. Civility in politics disappeared and with it the readiness to negotiate and compromise.

In an attempt to interpret the apparent spinelessness of Republicans in standing up to Trump, Paul Krugman argued in an article in the New York Times on January 4 that they have capitulated to a form of “malevolent tribalism”, a pursuit of power at whatever cost to truth and reality. How else to explain their support for the endless and groundless challenges to the legitimacy of the presidential election or the ludicrous attacks, for example, on vice-president elect, Kamala Harris, as a Marxist and wild socialist?

The shocking scenes of the invasion of the Capitol have certainly reminded us of the socio-political cost of months and months of irresponsible demagoguery.

My friends in the US are reminded of the thuggery of National Socialism’s Brownshirts, the SA, and it is surely no accident that the most powerful condemnation of these outrageous events has come from Angela Merkel. It is worth remembering that after World War 1, Germany was awash with paramilitary groupings which could not cope with the new world emerging around them. Hitler’s NS was only one of them. Are the weapon-brandishing supporters of Trump so entirely different from these para-militaries?

Similarly the trumpeting of fake news, to which we have become so accustomed, has worrying similarities to Goebbels’ effective use of the “big lie”? And is the call to “make America great again” not eerily reminiscent of "Deutschland uber Alles"?

Without the capitulation of right-wing parties such as the DNVP, driven by illusions that they could control the National Socialists for their own ends, Hitler would never has clawed his way to power. One wonders what Republicans such as Mike Pence or Mitch McConnell are now thinking as they reap the harvest of their spinelessness. Moral theologians in the US like Prof Kathy Kaveny of Boston are studying this question of Republican complicity.

Historians are rightly highly suspicious of any glib identification of contemporary political movements with the unprecedented horrors of the Third Reich and certainly there are major differences here. The judiciary, despite Trump’s attempts to flood it with his nominees, has stood remarkably firm.

There is nothing remotely similar to Himmler’s SS in the populist support for Trump. Indeed he was such a one-man show that he made no attempt to build up organisational structures comparable to those of the SA and the SS. There may be some comfort to be found in that. There remain, too, powerful figures within the Republican Party such as Mitt Romney who are vehemently opposed to the collapse of traditional Republican principles and values.

We can surely also take comfort in the robust resistance of more than half of the population of the US to Trump’s gifted but poisonous rhetoric. It is fascinating to see the Martin Luther King heritage re-emerging in Georgia, and surely no-one can underestimate the utter determination of the Black Lives Matter movement and the Me Too movement. The cultural world of the US has been forever changed by them.

But do Biden and Harris have the skills, and will they have enough good luck, to win back hearts and minds in the midst of a raging Covid epidemic and the unbelievable damage done to decent people’s trust in the democratic processes?

More than 60million people put their faith in Trump, and now have to cope with the collapse of their false dreams, while facing apocalyptic environmental challenges, and nerve-wracking economic, technological and social change. The Democratic victory in Washington will be meaningless unless healing and renewal can take place at the grassroots. One thinks of the social workers, the health professionals, the teachers, and union leaders who will have to pick up the pieces, exhausted as many of them already are.

Angela Merkel’s fury at the harm Trump has wreaked is understandable. Let’s hope that her confidence in the continuing strength of American democracy is also justified. Perhaps those commentators who suggest that the old two party system in the US is finished are right, and that a new Republican Party will emerge, side by side with what remains of Trump’s “malevolent tribalism.” Only time will tell.

"Get back to Normal". In the case of the USA, this means the continual soaring rhetorical promise of change, actually do nothing to help people and ram through the policies of identity politics.

I think this article proves that Matheson is a Dunedin historian, not a US historian! The Republicans have embarked on polarizing policies? Really? The Democrats are purging Americans of their constitutional right of free speech. They are talking about re-education camps for Trump supporters. Do you really think Americans can relax with Biden in charge? The Republicans use vicious character assassination. What did the Democrats do from day 1 to Trump? Sorry mate, I’m 3 paragraphs in and you have zero credibility! Everybody is a Nazi or a white supremacist according “historians” like Matheson. Flippant, ahistorical comparisons with the 1930s misunderstand how rapidly Weimar Germany slid into totalitarianism. The danger is not that the US is like Nazi Germany. It is that US democracy is being eroded in new and unfamiliar ways that do not perfectly match the 1930s. American democracy is being undermined by “historians” who make these idiotic comparisons. If the collapse of American democracy comes, it will not parallel Nazi Germany. It will fit the American context, the American here and now – and it will be the responsibility of Americans; not so called “historians”from Dunedin!

You know, supporters of twice impeached ex president trump, dismiss those who speak against him as being sufferers of "Trump Derangement Syndrome" or TDS. They are suggesting that trump enrages them so much that they become deranged by their hatred of him.
Well,,, after reading the contribution above I have concluded that TDS is a real thing but that applies those who support trump to the extent that they can be categorised as cult members, they are deranged, not capable of separating reality from the alternate universe that trump lives in. They truly do suffer from trump Derangement Syndrome.

I think Matheson probably should stick to Dunedin history and avoid international politics! Biden and the democrats want to put Trump supporters in re-education camps. Thats far more Nazi like than anything Trump has done. The article is a joke and the author knows nothing about American politics!

The Capitol riots were a pre-planned attack. The reality has been over-egged. One unarmed lady was shot by police, and the other casualties were heart attacks. What about the 6 months of BLM and Antifa riots and killings? Washington was a public relations trap.

The Italian coalition has just collapsed. Anyone remember Salvini?

Trump was a symptom of the people's voice being ignored. Populism is by definition, of the people, not of an individual, wanted by many. We are not going back to centralised propaganda. Republicans aren't being taken over by the Bush/Bush era warmongers again. Sorry. Trump was only riding the wave. Biden is not in power either.

I am a New Zealand citizen who also happens to have been born and raised in the USA. I voted to rid the country of its worst president of all time - Donald J. Trump. I hope he and his alt-right enablers are gone forever, but I doubt it. They'll be back because the racist forces of white privilege run deep in America.

Run deep, as orchestrated to run deep, by vested interests who convinced Trump that division will win elections.

America is in such a mess because its teachers suck. Most never wanted to be a teacher. It was just something that happened. Most stayed in college an embarrassingly long time and had taken nothing particularly useful, so what the hell else were they going to do? Many entered their college’s education program with absolutely zero enthusiasm. A faculty advisor told them that, for many people, teaching was often a fallback career, a Plan B. He was right, except most teachers never had a Plan A. Most teachers were kind of hoping that someone would see that they had no aptitude for this work and would stop them from making a huge mistake. No one did. Most of the teachers I know stuck with teaching for a few torturous years before dropping out to become an office temp. University professors are even worse! Teachers created the dimwits like Trump and Biden, teachers tought students to be racist and to exercise their white privlidge, and now they are trying to undue it. Its the teachers and the American educational system that are to blame!

Despite a silver spoon upbringing, Trump was a man for the people The dubious honour of worst Prez must go to obama. So America is exporting it's leftists to NZ now? Tragic....

You don't speak for every US citizen living here mate. Sleepy Joe will continue the dimise of what was once a great country, grant 20 million illegals citizenship and increase the debt to an astronomo level. Then the US will be a podunk, 2nd world country like new Zealand. That said, I hope you know having lived in the US doesn't give you the right to vote. Unlike here, only citizens can vote. Lastly, sure seems like the dimocrats have their fair share of racist. Hunter biden is the perfect example of white privilege.