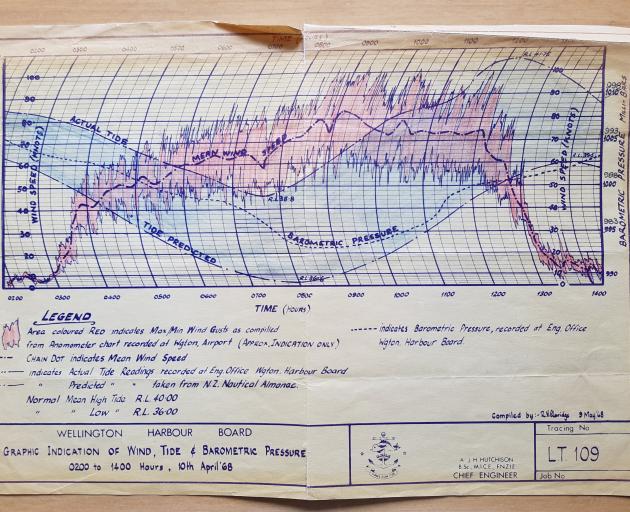 Among those at the Wellington commemorations of the 50th anniversary of the Wahine tragedy yesterday, there would have been quite a few who noticed the appropriateness of the weather.

A freezing southerly gale blowing up the east coast of the South Island, across Cook Strait and directly into Wellington Harbour reproduced, on a much lesser scale, the tempest half a century ago that caused one of the country's worst disasters.

On Monday I put out the call to Niwa for any records relating to the Wahine storm. Later in the day I had a note from friend and Niwa spokeswoman Susan Pepperell to say they had found a box containing just that kind of material. Among it was the incredible colour chart of wind, air pressure and tides that was drawn five decades ago by, or for, chief engineer A. J. H. Hutchison, of the Wellington Harbour Board, and that features here today. Who says science and art don't mix?

Thank you for all your calls and emailed memories of what you were doing on April 10, 1968. Unfortunately, I have room to mention only a few.

Alan Petrie, of Te Anau, says he has graphic recall of Wahine day.

``I was a student at that time in Wellington and vividly recall the green cicadas plastered over the windows of my flat in lower Tinakori Rd.

``The adjoining power pole had sheets of corrugated iron folded around it - much of this roofing iron had floated down from higher suburbs such as Karori. The roof on the neighbouring dwelling lifted and I endeavoured to help to put a railway tarpaulin over the gaping hole with little success - the last sighting of the tarp was of it sailing away towards Parliament.

``On a lighter note, my only personal loss was a bag of Easter eggs, sent to me by my parents from Invercargill. Sadly, this small Easter treat went down in the Wahine.''

Trevor Addis, of Mosgiel, says he and his wife, Shirley, were living in Ashburton in 1968.

``We had hired a house at Governors Bay on Banks Peninsula.

``We left home in pouring rain, and on the way we had a puncture on our Holden Special. Luckily there was a garage open at Lincoln to change the wheel.

``It was still raining solid and very windy on arrival at Governors Bay and we settled in. The wind got stronger and stronger, and the power failed, so we had to exist on cold food and keep warm by extended stays in bed or put more layers of clothing on.

``Our children, aged 12, 10, 8 and 3, wondered what was happening, especially when full, small roof tanks started flying over our house and into Lyttelton Harbour. We had no way of knowing what was happening in the rest of New Zealand, as we had no radio, but eventually packed up and headed for home several days later.

``The roads were littered with smashed trees, but luckily there was space to get around them. What a holiday to remember.''

Helen, of Kaikorai, wasn't even in New Zealand.

``I was on a 70-day trip round Europe and I was in Portugal and saw on a newspaper billboard: ``Wahine Disaster''. Those are the only words I can remember.

``It gave me a fright because you say to yourself, `do I know anyone on it?'. I knew it was a ship.

``I also remember the August 1975 `Big Blow' in Canterbury. I was walking to work in Christchurch, around Centennial Pool, pushing my bike because there were branches coming down everywhere. At Noah's [Hotel] I watched a lady get bowled over and then rolled along the road by the wind. It was very frightening.'' 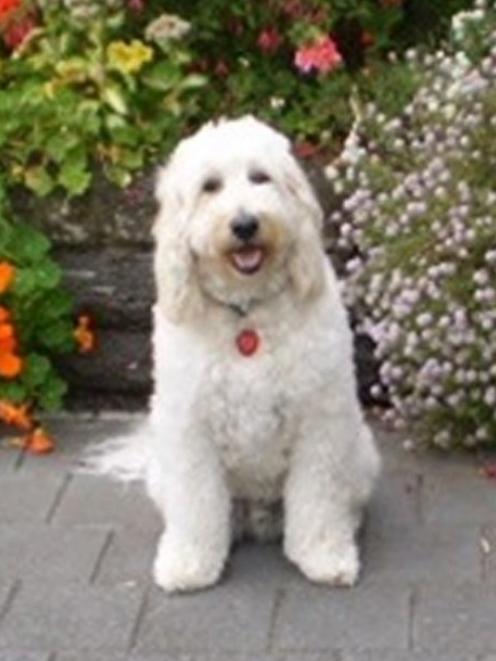 Pat Barnes, of Green Island, has been dealing with the repercussions of the change from daylight saving time.

``As I am a senior citizen I can take or leave daylight saving. I no longer believe the extra hour of daylight fades my carpets, but I do know it really upsets the internal clock in my dog, Riley (pictured here).

``Walk time for him is 1pm, dinner time is 5pm and bedtime is 10.30pm. Trying to tell him to look at the clock and see what the actual time is does not work. He is convinced that he is right and I am wrong.

``After six months he slowly comes round to believing that maybe the clock is right, and then the applecart is upset all over again.

``My dog can give very accusing looks.''

Thanks Pat. Have to say, Riley doesn't look too perplexed or accusatory in the photo you sent in. 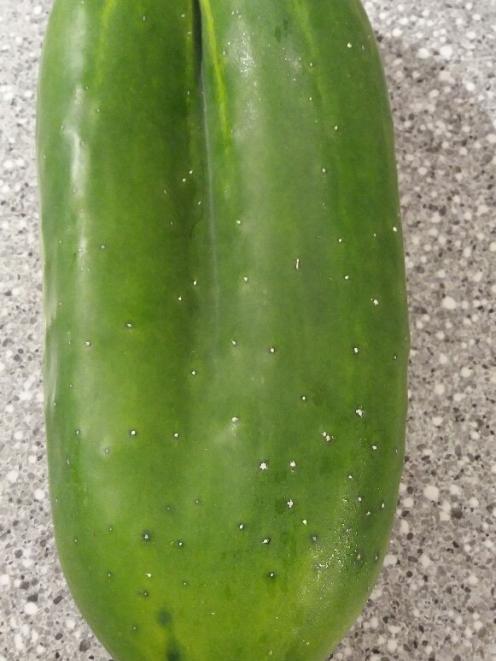 I've seen some pretty weird home-grown fruit and vegetables over the years. Certainly carrots and tomatoes can develop some rather strange protuberances. But I never thought cucumbers could ever look like anything other than cucumbers.

Gordon Cameron, of Mosgiel, however, has put me right on that.

``Here is a photo of one of my last cucumbers that I have grown this season in my glasshouse. As you will see from the photo, two cucumbers have grown together.

``I have never seen this in all the years I have been gardening.''

Anyone else with cucumber stories?