Passion for opera traced to gesture of love 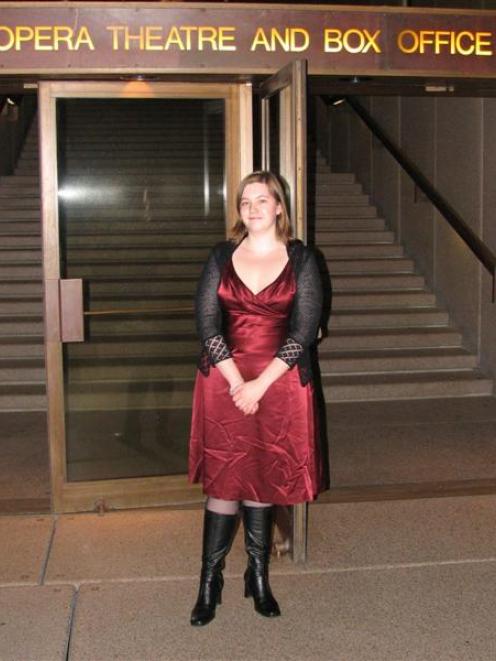 Opera fan Sarah Noble attends another opening night.
When Sarah Noble was small, her father played Lucia Popp's Mozart arias for her and sealed her fate.

At least that's how the family story goes.

The year was 1984 and Bill Noble, now manager of Dunedin's University Book Shop, apparently walked into a music store determined to find some Mozart for his baby.

Kiri Te Kanawa was not in stock but the woman behind the counter suggested he try Lucia Popp instead.

Bill Noble instantly fell in love with the operatic soprano and his daughter says they like to think that's also what made "such a natural opera fanatic" of her.

And the former Columba College pupil, who now reviews operas in Sydney, does not use the term "fanatic" lightly.

Though her own musical talents are sadly nonexistent - "you'd have to hold me at gunpoint to make me sing in public and even then I might not do it" - she thought nothing of turning her back on the prospect of further study to move to Sydney, home to the world's most recognisable opera house and her favourite soprano, Cheryl Barker.

Noble can spend up to four nights a week at the opera house during the season.

The move in late 2006, after completing her arts degree, happened in a hurry, she says.

"I saw a job advertised in classical music retail, threw together a resume and they hired me over the phone. I got to Sydney on a Friday and started work the following Monday."

During the day, she is assistant manager at Fish Fine Music, a classical music store in Sydney's CBD.

At night, she reviews opera for New Zealand Opera News and TheOperaCritic.com, which is run from Auckland and collates opera news, reviews and images from around the world.

The reviews are mostly a labour of love but do mean press tickets to every opening night, "which is a fantastic perk".

She has an opera-related blog that attracts 250 hits a day and continues much as it began in 2004 - "an extended love letter to a wondrous art form".

She has also written several cover stories for Fine Music magazine, which is sent out to subscribers of a community radio station, and was recently commissioned by the Sydney Symphony to write a programme note for its concert with Dame Kiri Te Kanawa this month.

Though introduced to opera early, it was not until buying some "cheap-and-cheerful" Puccini compilations in 2003 that Noble felt a passion being unlocked, "as if it had always been lurking there, waiting to take over my life".

"Completely. I'm quite good at passing phases and fleeting fixations but opera just took possession of me from day one and that's been that ever since."

The former Class Act recipient says she is not is "massively" ambitious but does believe in her right to pursue the things she is passionate about and to reap whatever rewards might come along as a result.

"I've long been a believer in what I semi-jokingly call the silver platter philosophy. Good things happen."

"It's not about being lazy, although I can be guilty of that too, but being open to the possibility that some of the best things in life can arrive unexpectedly."