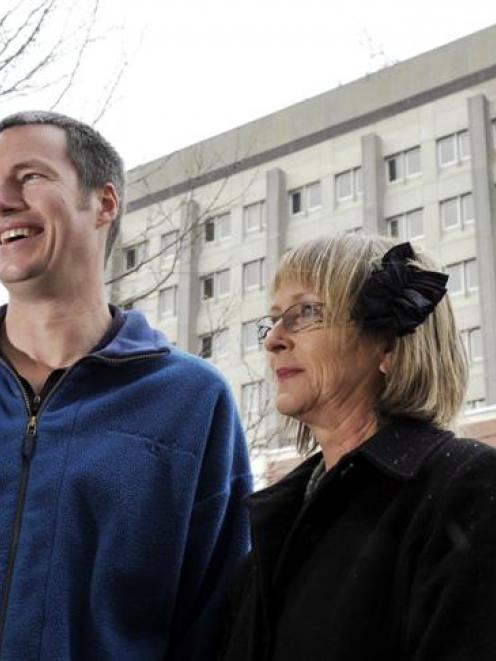 Southern District Health Board nurses Nick Wooliscroft and Phiona Winter say they were happy to assist quake-affected Christchurch. Photo by Gerard O'Brien.
The atmosphere in Christchurch at times was like a "group hug", as the community rallied to help those affected by this month's earthquake, says Dunedin nurse Nick Wooliscroft.

Both were issued a car, a list of clients, and a GPS unit to navigate, which had proved invaluable, Mr Wooliscroft said.

Ms Winter said her main fear had been navigating the suburbs; she was confident of the work.

Most of their clients were elderly, although a few were middle-aged, and housebound with serious conditions.

It was odd driving on Christchurch's famously orderly and straight streets, to find the car wobbling over roads that had "bubbled", Ms Winter said.

The first indication something was wrong was driving up Riccarton Rd the first night, seeing the gaps between shops and "piles of rubble" punctuating an otherwise functioning street.

Mr Wooliscroft said the damage was not as bad as he had feared, although it varied from street to street, and house to house.

The morale among health workers and the wider community was good, he said.

They were both impressed their Riccarton motelier was out in the freezing cold on the Saturday morning, scraping ice off their cars.

Everyone seemed grateful for the out-of-town assistance, with nurses and carers from all around New Zealand helping.

The magnitude of the aftershocks felt "similar or a little bit less" than what the initial September 4 quake was like in Dunedin, Mr Wooliscroft said.

Many people were grateful they were relatively unaffected by the quake, but everyone had been touched, he said.