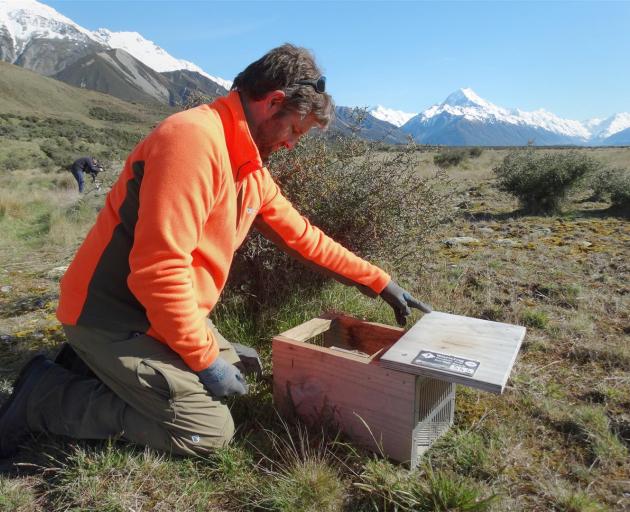 Twizel-based Department of Conservation predator-control ranger Glen Currall inspects a trap near the Tasman River in the Mackenzie Basin. The number of traps in the area will more than double from 1400 to about 3500 as part of the Te Manahuna Aoraki project. PHOTO: DANIEL BIRCHFIELD
Protecting endangered species from predators on a massive scale is the goal of the new Te Manahuna Aoraki project based in the central South Island, announced by Conservation Minister Eugenie Sage yesterday.

The project will create a predator-free mainland island of up to 310,000ha in the upper Mackenzie Basin and the Aoraki Mt Cook National Park.

Ms Sage said it aimed to provide a safe, secure habitat for 23 native species, such as the kea and rock wren in alpine zones and braided river species, including wrybill and the world's rarest wading bird, the kaki (black stilt).

The neighbouring mountain ranges would protect and enclose two-thirds of the project area from most invasive pests.

Department of Conservation project manager Simone Cleland said the jewelled gecko and robust grasshopper would also benefit from the initiative, in which the amount of land being protected will initially increase from 23,000ha to 60,000ha through use of more than 3500 traps, up from the current 1400.

"The environmental benefits are huge and this project will provide protection from the alpine zone ... down to braided river species.

"In the next three years, we are trying to learn about research options that will allow us to take on 310,000ha of landscape and ecosystem restoration.''

Te Manahuna Aoraki chairwoman Dr Jan Wright said the launch of the three-year feasibility stage came as the result of an "urgent'' need to protect endangered species in the area, especially the kaki.

"New Zealand's ecology is quite different. For instance, the black stilt and the wrybill lay their eggs on the stones in the open, which is not what you do when there's predators around.

"There really is a restoration movement in New Zealand for birdlife and what's exciting about this is the potential scale. It's a large, large area.''

During the three-year phase - a $4.5 million project - predator control for threatened braided river and alpine species will be extended, rabbit, Canada geese and invasive weed control will be carried out, research will be done on hard-to-manage pests, high-altitude fences will be trialled, work to protect native fish will be started and an ecological survey of the area will be completed.

Ms Sage's announcement coincided with the opening of a breeding aviary in Twizel for the kaki, which features a 10-bay structure that will allow Doc to boost its captive breeding programme.

A snowstorm in 2015 destroyed one aviary and seriously damaged another.

Doc's captive breeding programme has been a key component in the bird's recovery from 31 birds in 1991 to 130 today, and the department has been working intensively hatching and rearing chicks in aviaries before releasing them into the wild.