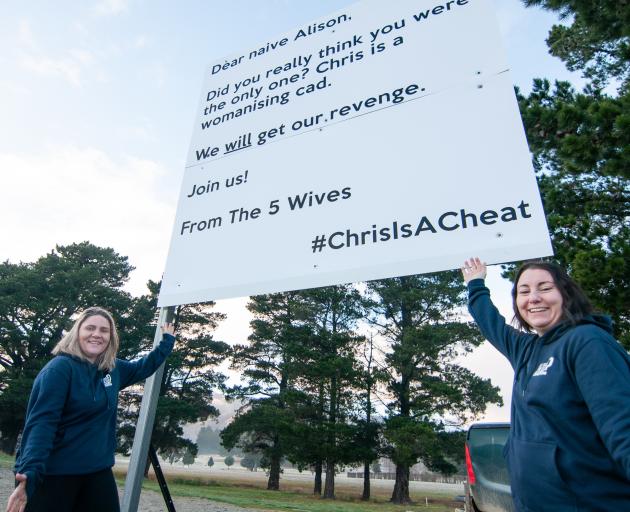 The billboard from a woman named Allison appeared in Barry Ave and speculation started shortly after.

"Hello Chris, I know all about your new love — Jill.

"You were caught with your ‘pager’ off again, Your soon to be ex, Alison."

Social media lit up with speculation and news reached the Otago Daily Times offices in Dunedin as news tips came about a scandal rocking the Central Otago town.

The billboard was not a lovers’ spat but a guerrilla marketing campaign for the Fine Thyme Theatre’s upcoming production of Shortland St The Musical.

The phone rang red hot at restaurant Five Stags — the owner of the billboard space — and people were trying to work out who Chris and Allison were, she said.

The only hint for people to investigate more was a hashtag at the bottom #ChrisIsACheat.

When people searched the hashtag on social media it came up with posts from Fine Thyme Theatre regarding the show.

"We knew we had to put a clue in there, but lot’s of people don’t know how to use a hashtag," Ms Tait said.

"We’re teaching the people of Cromwell how to use a hashtag."

A day or two later, people had started to cotton on to the billboard’s actual purpose and excitement for the production was starting to build, Ms Tait said.

"I had someone who had their partner send [an image of the billboard] to them from the North Island, asking ‘should we go?"’

"It’s the most fun thing we’ve done so far," she said.

The next instalment of the billboards from Chris’ "five wives" is now up.