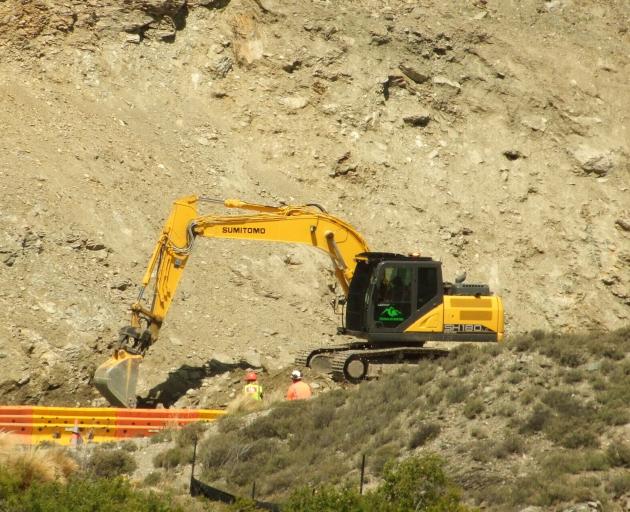 An excavator works to clear debris from the base of the slip that loomed over State Highway 8 in July after material again moved following heavy and persistent rain earlier this month. PHOTO: ALEXIA JOHNSTON
Central Otago’s New Year deluge again caused the earth to move over State Highway 8 near Cromwell.

The work included all the initial work on the slip itself, the design and installation of a rock catch fence and repairs to the road surface below the slip.

"This was a significant event for the region which had an impact at the Deadman’s Point Bridge site."

The benches at the Deadman’s Point slip were stable and the upper sections had performed exactly as intended.

However, the lower benches were partly constructed of fill materials cast down the slope as the works were undertaken, Mr Stewart said.

"These benches were always likely to shed some material and that is why there was a barrier installed at the base and there is some space at the toe of the slip."

The work under way now included removing the slip material and reforming the lower bench, after which the barrier would be stood back up.

The overall performance of the slope would continue to be monitored, Mr Stewart said.

"As with other sites in Central Otago, we will see materials slip during heavy rainfall ... but overall the slip held up very well through the event and is stable."