Board backs call for name consistency 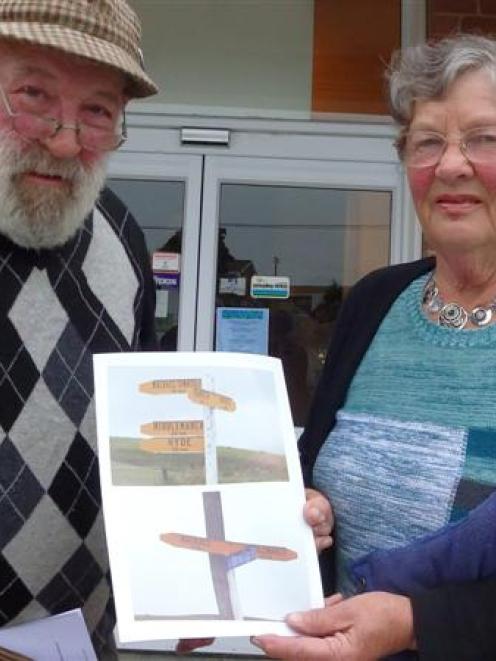 Neil and Margaret Roy, of Macraes, hold a photo showing one of the incorrect signs displayed around the Macraes district. Photo by Bill Campbell.
A resident of the Macraes township wants it to be called just that - Macraes, not Macraes Flat or Macraes Township, and the Waihemo Community Board agrees.

The board this week recommended to the Waitaki District Council that the name ''Macraes'' be adopted for the township.

Former Waihemo county and then Waitaki district councillor Neil Roy (66) served in the early 1980s when the Waihemo County Council put up signs at Macraes announcing the township's name as Macraes.

He told the public forum at this week's board meeting there had recently been a proliferation of incorrect and misspelt versions of the name on signs around the area, including Macraes Flat and Macraes Township.

There are also numerous incorrect spellings of the name Macraes, including Macreas, McRaes and MacRaes, he said.

In July last year, the Waitaki District Council altered name signs in the area from Macraes to Macraes Flat.

After fruitless discussions with

council staff, Mr Roy lodged a formal proposal to the New Zealand Geographic Board seeking to have the name Macraes officially applied to the township and gazetted accordingly.

Historically, Macraes has always referred to the township and Macraes Flat to the surrounding area, Mr Roy said.

The name came from John McRae who was employed as a boundary rider in the area. Following the discovery of gold in 1863, the settlement became known as Macraes and that term was used on district maps and on many New Zealand Gazette references to the township.

The Waihemo Community Board recommended to the Waitaki District Council that the request to rename the settlement at Macraes Flat to Macraes be supported.

WDC planning manager David Campbell said in a report that renaming the settlement Macraes and the wider locality Macraes Flat would bring some clarity, but there would be a need to replace some signs.