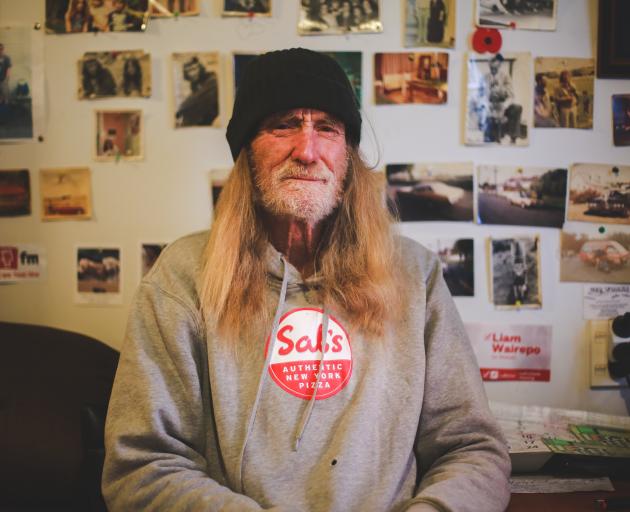 Red Farrant’s hip was ‘‘smashed to pieces’’ after a hit-and-run collision last month, but he wants to continue walking the length of the country for charity. PHOTO: REBECCA RYAN
An Oamaru man who suffered horrific injuries after a hit-and-run during a charity walk says he should be dead.

But Red Farrant is determined to get back on the road.

Mr Farrant, who was walking near Mosgiel last month when he was hit, said his recovery had been going well.

"I’m just so chuffed to be alive. I should’ve been dead."

He had only just started his walk from Bluff to Kaitaia, raising money for 13 different charities, at the time of the crash.

He started the walk, something he had wanted to do for many years, on April 9.

Mr Farrant had been stopped by police several times along the way, including in the hours leading up to the collision. The police had received reports from members of the public concerned about his safety as he was walking along State Highway 1.

He admitted it was a "silly mistake" to try to walk across the four-lane highway in peak traffic.

"A car just came from nowhere. I had an instant to step back and my baggage trolley went under the wheel.

"I swung around and hit the passenger’s door ... [it] launched me two lanes and I landed in the middle of the highway.

"People immediately stopped and came running. They blocked the highway with their vehicles with their hazard lights and directed the traffic while the police and ambulance got there."

He did not see the green sedan that drove off after hitting him, but said it was a moment he would never forget.

"I knew something was seriously wrong, but I could feel my legs."

He spent nine days in Dunedin Hospital and was now happy to be recovering at home in Oamaru.

He was already back out walking, albeit with crutches, determined to complete his walk later this year.

"I’m going to winter over. I’ll wait until spring when it’s a bit warmer."

This time, he would bypass cities — "no more motorways" — and would carry a backpack, rather than a trolley.

He said Dunedin Hospital staff were all "diamonds" and he was overwhelmed by the generous hospitality he received during the walk. He was offered free accommodation and many meals and drinks, and hundreds of people stopped to offer him rides, which he politely declined.

"The people were just so inspirational and supportive — that kept me walking."

A police spokeswoman said inquiries into the crash were ongoing.

Police had received some information from the public and continued to assess it as it came in.