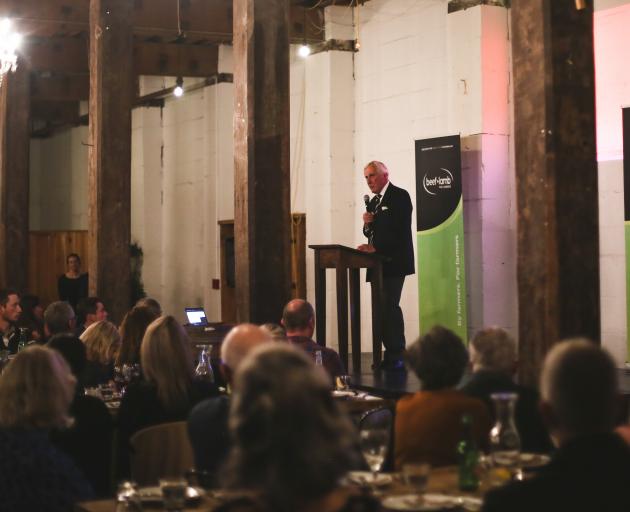 Mr Berry, who, with his wife Carol, formerly owned Totara Estate where the original shipment was processed before it left Port Chalmers for London in 1882, was a guest speaker at a dinner in Oamaru on Tuesday night to mark National Lamb Day, and the arrival of the shipment in the United Kingdom 140 years ago.

The B+LNZ celebrations were a chance to reflect on the important contribution the red meat sector had made to New Zealand’s economy over the past 140 years, Mr Berry told the 150-strong crowd at Oamaru’s Loan and Mercantile building.

"That first shipment, of course, was the beginning of our meat export industry today," he said.

"And this, as we all know, had enormous economic and social benefits that followed, both in land settlement and development, and through the new industry that was formed, and it very rapidly developed into our major export trade and earner — and it’s the source, even more today, of our national wealth and our ability to sustain our people and the standard of living we have in New Zealand."

The first shipment was organised by Thomas Brydone and William Davidson, who, faced with the global collapse in the price of wool, saw an opportunity.

Slaughtering began at Totara Estate, just south of Oamaru, on December 6, 1881, in a purpose-built killing shed, with room for 12 butchers. Carcasses were hung overnight, before being taken across a paddock by cart to the Totara railway siding and transported to Dunedin.

About 640 sheep had been prepared and frozen when disaster struck. A crank shaft in the freezing unit broke, and the sheep had to be sold for what they could get in the Dunedin market.

"The irony of it all, is the people of Dunedin were the first consumers of the first shipment of frozen meat," Mr Berry said.

After the delay, loading resumed and on February 11, 1882, the shipment was ready. Dunedin set sail from Port Chalmers to London four days later.

The voyage was not uneventful, Mr Berry said. Sparks from the boiler unit set the masts on fire on more than one occasion, and when the vessel was becalmed in the tropics, the crew noticed that cold air in the hold was not circulating properly.

To save the historic cargo, Captain John Whitson crawled inside and sawed extra air holes, almost freezing to death in the process.

The sheep and lamb was sold at London's Smithfield Market and, with the returns nearly double what could have been achieved in New Zealand, the shipment paved the way for the frozen meat export industry in New Zealand.

It developed very quickly, Mr Berry said. Within 10 years, there were 17 freezing works in New Zealand, and within another 20 years, 31.