Oamaru centenarian Tom Garbutt does not know the secret to living a long life but says keeping busy has been his "ideal way to keep going".

Mr Garbutt, who celebrated his 100th birthday with family and friends in Oamaru on Sunday, is not slowing down.

"I contracted Tb and when I came out of hospital I said to my father, ‘I don’t want to go back to school, I don’t like it’," he said.

He started working as a gardener for a fruit and vegetable market in Moray Pl aged 14, then for the Otago Hospital Board at Pleasant Valley Sanatorium, just south of Palmerston.

When World War 2 broke out, he wanted to enlist to serve, but gardening was classed as an essential industry. 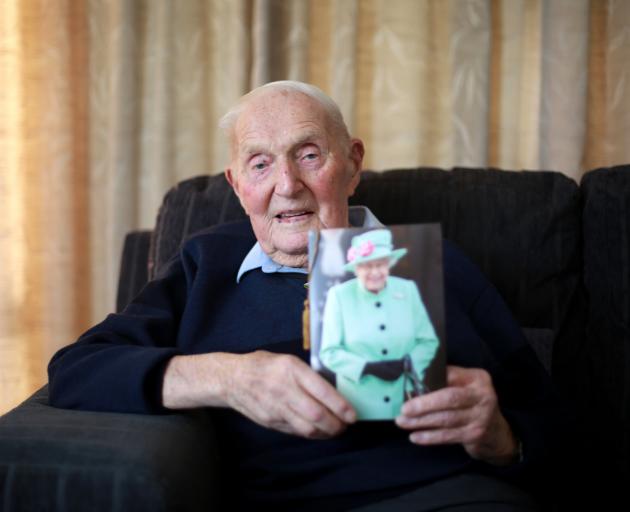 Tom Garbutt, of Oamaru, celebrated his 100th birthday on Sunday. PHOTO: REBECCA RYAN
After serving in the 3rd New Zealand Division, as part of the United States Marine Amphibious Corps, he returned to New Zealand and spent time at Burnham Military Camp until he was released from the army.

He married wife Nance in 1945 and worked for the Otago Hospital Board in Dunedin as a gardener. Mr and Mrs Garbutt had four children.

When an opportunity came up to manage a production nursery in Oamaru, he moved to North Otago with his family.

Four years later, he bought the business and took over the nursery in College St and garden shop at the corner of Thames and Eden Sts himself.

"It became the busiest part of my life," he said.

"One of the very large parts of my business was growing tomato plants for the Kakanui tomato growers. Virtually none of them grew their own plants, they relied on me to grow their plants and three of my clients at the time planted 20,000 tomato plants each year - 10,000 in April and then 10,000 later on around about December.

"That kept me extremely busy."

Roses were another part of his business - he would grow up to 8000 a year - and he co-founded the North Otago Rose Society .

He later developed a passion for rhododendrons and started a breeding programme. He has 12 of his own varieties registered and named with the Royal Horticultural Society.

He spent 18 years presenting a gardening show on Radio Waitaki every Saturday morning and travelled the South Island speaking about rhododendrons.

Mr Garbutt was a member of the Rotary Club of Oamaru for 12 years, and served on the committee of the Oamaru RSA Bowling Club for 16 years, including two terms as president.

"I often wonder ‘How the hell did I fit in all these things?’," he said.

"I suppose if you keep busy, that’s the ideal way to keep going. I didn’t have time to stop."

He was a keen snooker player and fisherman "in the day" and a "mad golfer", but stopped playing aged 99 because he "just couldn’t keep up with the boys" any more.