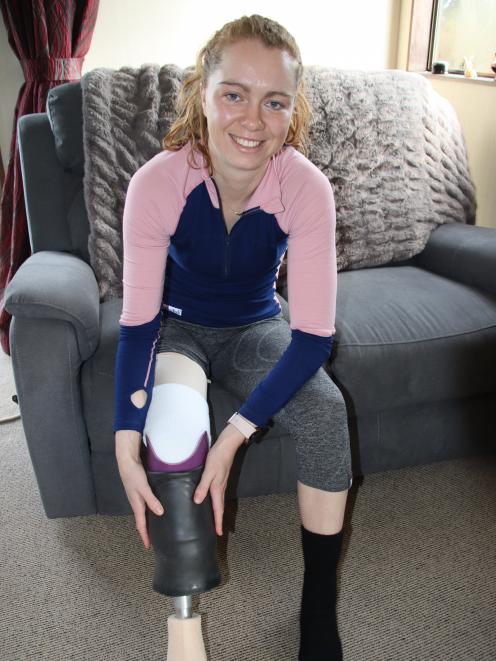 Aleina Beer is recovering well from the partial amputation of her right leg and is getting used to wearing a temporary prosthetic limb. PHOTO: SANDY EGGLESTON
Deciding to have part of her right leg amputated has opened up new possibilities for Aleina Beer.

In October 2019 the Northern Southland Pony Club senior coach, who lives near Dipton, was diagnosed with meningitis and septicemia.

She spent three weeks in Dunedin Hospital’s intensive care unit fighting for her life and it was 110 days before she was released.

The list of health complications she experienced as the result of the meningitis included multiple organ failure, pneumonia, toe amputations and an infection in her right ankle.

Partway through last year she started riding again and after being classified as a para equestrian rider, which means she can compete without using stirrups, entered the Northern Southland Pony Club Show, her first event since her illness.

Beer (25) said she tossed up whether to have the ankle fused, replaced or her leg partially amputated but in the end the decision to amputate was an easy one to make.

"My foot was really arthritic, painful and hard to walk on.

"It wasn’t going to get any better.

"I decided if I amputate I am going to be able to run, ride and do everything I want to do."

There was a high risk of infection with the other two options and it was likely the leg would still need amputating in 10 years’ time.

"It was just a better option, I thought." 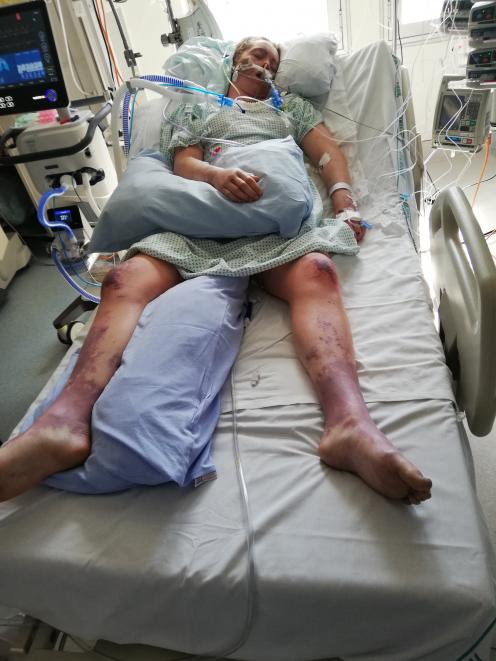 Aleina Beer was placed in an induced coma in October 2019 after contracting meningitis and septicaemia. PHOTO: SUPPLIED
Since the operation in June, the leg had healed well and about two weeks ago she was fitted with a temporary prosthetic limb.

"It’s just so much better being able to walk normally."

If she moved her lower leg muscles it still felt like her missing foot was there.

"I don’t have any phantom pain, which is really good."

The end of the bone was still tender so she was using a crutch to take some of the weight off the leg.

"That will toughen up."

In about six weeks she would return to the Dunedin Artificial Limb Centre to be measured for custom-made limbs.

For the past year she had been focused on achieving short-term goals and now she had achieved the last one, which was the amputation, she needed to make plans for the future.

"If you don’t have goals then what are you trying to do?"

She wanted to start riding again, but her horse Peta Pan was not fit to be ridden at the moment.

She was considering trying out for the 2024 Paris Paralympics.

"I’m going to get into athletics.

When the stump was healed she would go back to her job at Peak Performance Massage in Invercargill.

"Once I can stand on my feet with no pain I can probably start working again."

Speaking about her journey with meningitis to educate others about the disease was something she was keen to do, she said.

It was important people were aware of the symptoms, which included a stiff, sore neck, headache and vomiting, and sought medical help fast, she said.

There was a free meningitis vaccine available for people aged between 13 and 25 years old who were living in close quarters such as in hostels, but not many people knew about it, she said.

"I wish I had known about meningitis in general and the vaccine.

"That could have prevented the dramatic change in my life."