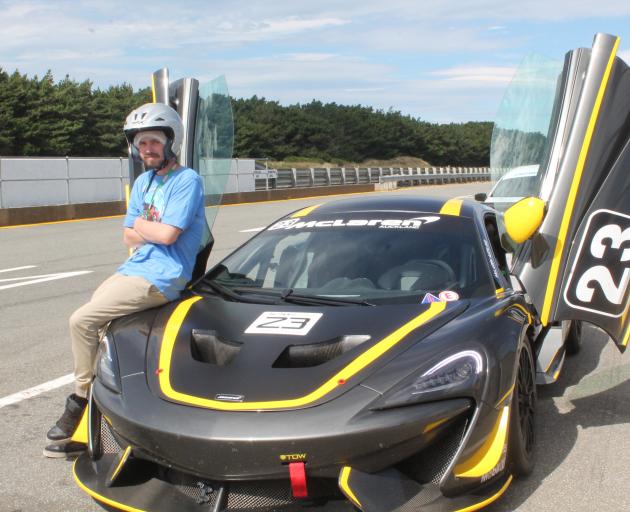 Leukemia patient Ethan Smith takes a ride in a race car during the Race4Life event in Invercargill. Photo: Luisa Girao
Driving a McLaren at 225kmh - Ethan Smith has ticked off a ''bucket list'' item.

The 20-year-old had always wanted to drive a sports car. However, in August 2017, he was diagnosed with leukemia and had to put his dreams on hold.

That changed during a Race4Life event at Teretonga Park on Tuesday..

The racing fan said the disease had turned his life ''upside down''. Some friends became distant because they did not know how to deal with the situation, and due to treatment, he stayed home a lot, resting and playing video games.

''I have a lot of limitations, but today, for the first time in years, I felt like a normal young adult. It was awesome.''

The Gore resident was not nervous or concerned with the level of speed.

His mother, Sharon Smith, was overwhelmed.

''The past few days have been hard for Ethan so it is so good to see my son smiling again.''

Another person that could not shake his grin was Peter Crump.

The 55-year-old Invercargill man had watched racing at Teretonga Park for years and always wondered what it would be like to drive there. After being diagnosed with a brain tumour in 2001, he was unable to drive.

''I asked if I could drive, but they did not allow me to. I really miss driving, but I understand the reasons.''

More than 20 palliative care patients and their families attended the Race4Life event.

General manager Viv James said it was the first time they had held it in Invercargill.

''We want patients to feel part of the community and not isolated. This event is about spreading the love and this one, in particular, is everything about the Southland flavour.''