Firefighter back from long battle

Firefighters at the Mendocino fire in Northern California take stock of where to create fire breaks to contain the huge blaze. Photos: Supplied
A Te Anau rural firefighter reckons several weeks helping fight the largest wildfire in California’s history has given him "a year’s worth of learning".

Hamish Angus (45) arrived home last Saturday after a month with hundreds of other firefighters battling the Mendocino fire in northern California.He was one of about 100 fire officers — 37 from New Zealand, the rest from Australia — deployed to California at the beginning of August to help fight the massive Mendocino blaze. He was the only Otago-Southland firefighter in the group.

The details of the California firefighting effort were different from  New Zealand, but the work was essentially the same, requiring similar skills, Mr Angus said.

"One of the benefits for Fenz is the amount we learned while we were there."

The day the group arrived, the Mendocino fire was still expanding and had officially become the largest fire in California’s history, covering about 460,000 acres. After a couple of days recovery and briefing time, the group was divided and firefighters sent to the area where they would be based. 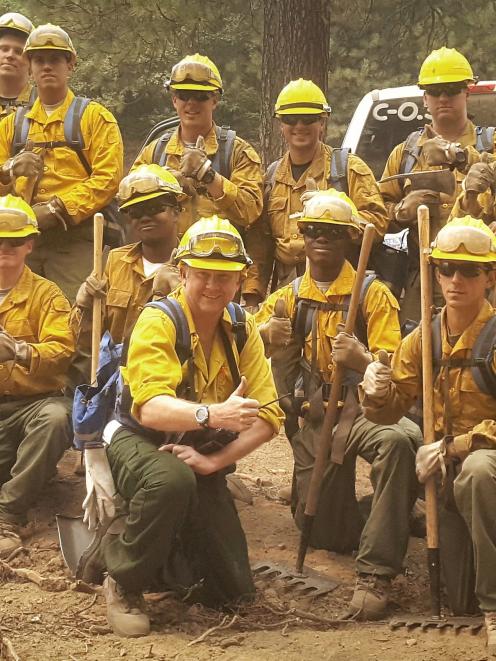 Te Anau rural firefighter Hamish Angus (centre front) with some of his US military firefighting team, ‘‘Rugged’’, ready for another day of fire containment in Northern California.

"We were working more in management, supervisory and safety officer roles, than actual firefighting, working with the local guys. They were all pretty exhausted," Mr Angus said.

More than 300 firefighters were working on the Mendocino fire where he spent his deployment.

"Logistically, it was a massive operation".

During his month there he worked two stints, each of 14 days, with two clear days off in between. He was a safety officer, going out with the crews, keeping an oversight.

"Quite a lot of guidance was needed and bringing in people from outside made it easier to tell the locals to pull out of an area.

"People can get tunnel vision. When a place means a lot to them it’s easy to become blinkered and to try too hard to save it, resulting in risks being taken."

Mr Angus described fighting the fires as like a chess game — a long-term campaign with a lot of strategy.

Allied to direct firefighting work, containment teams worked several kilometres away. They were specialists involved in creating fire breaks, using aircraft to suppress flames and slow down the blaze — "to buy time".

"There’s only one way to learn to fight such fires — that’s to do it," Mr Angus said.