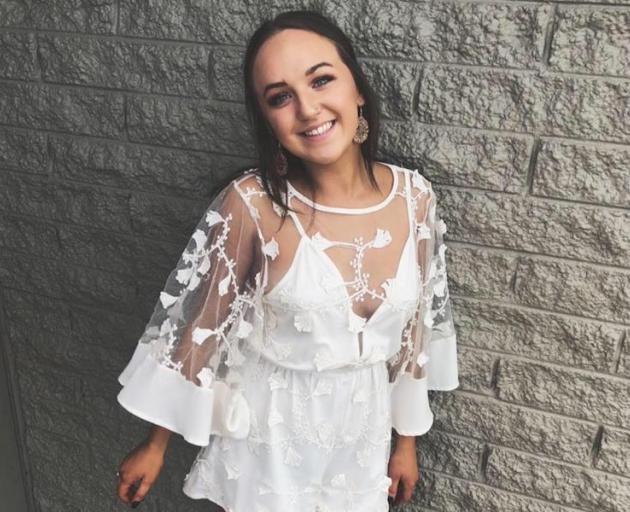 Thalia Newport died after the van rolled in February. Photo: Givealittle
A 21-year-old Invercargill man has pleaded guilty to careless driving following the death of Thalia Newport (20) and the injuring of seven others.

Aaron James Collinson was driving the van in which only two people had their seatbelts on when it slipped and the driver tried to avoid a pole.

The summary of facts stated Collinson was driving from Queenstown to Invercargill in the van which consisted of three seats in the front and two bench seats fixed in the rear of the van, facing each other.

"The seats were not certified and did not contain any seatbelts for the rear passengers to ‘utilise’,” the summary said.

Having left Queenstown, the group in the van socialised for some time before some of them went to sleep.

Upon reaching Winton, Collinson stopped the van for a short time before continuing his journey south on State Highway 6.

At approximately 4.30am he exited the Winton boundary where he drove past a ‘‘Slippery When Wet’’ sign which warned drivers that for the next 2km the road could be slippery and had a temporary 50kmh speed limit.

At the time, the road was damp and Collinson was driving at 100kmh.

A short distance out of the town boundary, Collinson steered left around a bend and the vehicle drifted towards the left side of the road, crossing the fog line and driving into the water-table ditch on the side of the road.

At the same time as the vehicle did this, it collided with the 50kmh temporary speed zone sign.

It was estimated the speed he was driving was between 96kmh and 108kmh.

The van rotated sideways and rolled approximately six times over a distance of about 49m into a grass paddock.

The passenger’s siding door came off, flying into the air, hitting the power lines immediately above the crash scene.

"As the van was rolling all occupants who were unrestrained in the rear of the van were thrown from it at different points as it was rolling,” the summary of facts stated.

Miss Newport, who had been thrown from the van, had her body trapped under the van on the driver’s side and died at the scene from the injuries she received.

The other victims sustained injuries ranging from moderate to serious.

Collinson told police the back of the van went into the opposite lane and as he saw a pole in front of him, he tried to avoid it before the van crashed.

He was not affected by alcohol or drugs.

The court heard reparation of $12,000 was sought for the damage to the van.

Defence counsel Richard Smith told the court "all victims” were friends and he would seek in his submissions a disqualification, reparations and supervision sentencing for Collinson.

Community Magistrate Simon Heale remanded Collinson at large until his sentencing on November 12.