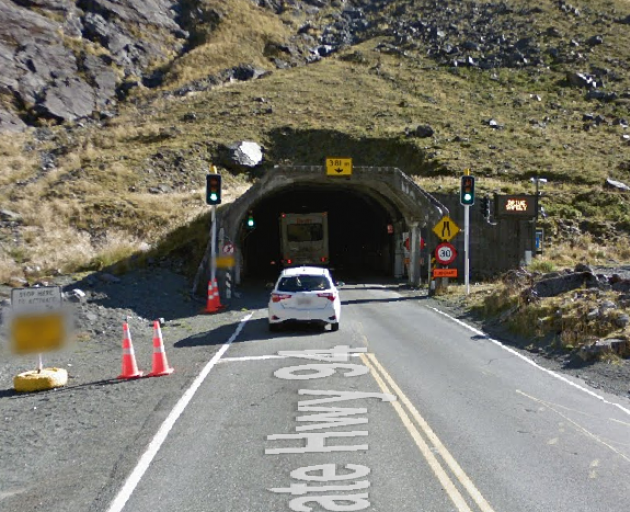 The Homer Tunnel on the Milford Road. Photo: Google Maps
Plans  to upgrade Fiordland’s Homer Tunnel have had to be altered, as the originally proposed safety improvements have proved too expensive for the Government-funded project.

State Highway 94 from Te Anau to Milford Sound was one of five stretches of state highway in New Zealand that had a persistently high personal risk between 2002 and 2016.

Last year, the Government announced $25million in funding for tunnel safety improvements through its rejuvenation package aimed at kick-starting the post-Covid-19 economic rebuild.

In an update last month the NZ Transport Agency said the project looked at options for a deluge (fire suppression) system, ventilation and pedestrian refuges within the tunnel along with a package of safety improvements.

Priced at $3million, the package of safety works had begun, based on the recommendations of an investigation into a car fire in the tunnel at the beginning of last year.

While the other three options were investigated, the funding required went over the remaining budget of $22million and the transport agency had to review another option to increase safety for road users and crew at the tunnel.

Subject to Crown Infrastructure Partners endorsement, it would proceed with letting the construction tender.

The new option involved the existing eastern avalanche shelter, the structure at the tunnel entrance, which had reached the end of its useful life.

According to the update, it was hoped the design would be completed this year and work would start next year.

Given the need to work around the avalanche season and the complexity of working in the extreme environment, the avalanche shelter would not be completed until 2023, the update said.

According to documents obtained by the Otago Daily Times, from April this year the shelter could be extended by 60m to 120m within the available budget.

An almost 35m-long reinforced concrete avalanche shelter was built to provide protection for workers during construction of the tunnel. It was originally about 150m long but had been damaged over the years.

The documents state any of the proposed avalanche shelter options could be extended in the future and the estimated cost to construct the preferred option 50m beyond the portal was between $7.5million and $15million.

Improvements to the plant room and relocation of equipment would cost between $2million and $4million.

‘‘Longer term, extending the avalanche shelter over the full length of the East Homer avalanche path, to a similar extent as existed with the original structure, appears to offer significant benefits.

‘‘Beyond current available funding, this is likely to require a further investment of between $15million to $30million.’’

It was estimated the work would employ 67 people.

A speed review consultation was also announced on Monday this week, which aimed at bringing speeds into line with the surrounding environment.