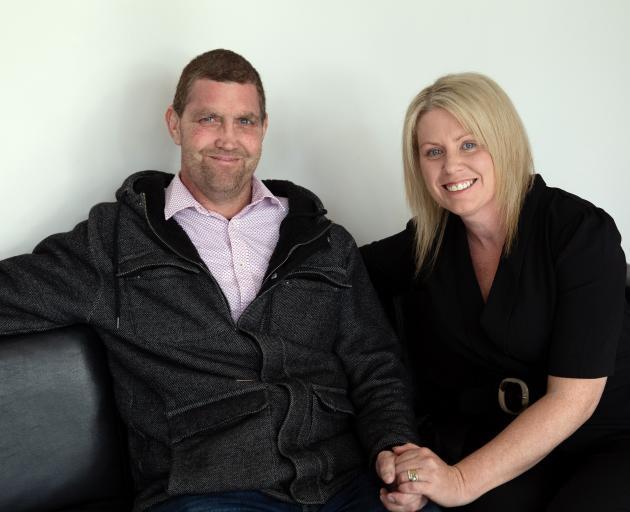 Blair Vining and wife Melissa. Photo: NZ Herald
Plans for a Southland charity hospital, intended to provide timely bowel cancer diagnosis, are to be discussed tonight with potential investors, interested parties and supporters of the idea.

He and his partner Melissa have initiated an attempt to create a community hospital to improve cancer sufferers' chances of survival.

''Since Blair was diagnosed, we've had hundreds of people contact us who've been denied services by the Southland DHB.

"If we can put an end to the suffering of others by establishing a local charity hospital service to provide timely diagnosis and treatment, then Blair's suffering will not have been in vain,'' Mrs Vining said.

The initial plan for a Southland community charity hospital service would be to provide colonoscopies to Southland patients left on waiting lists.

It would then expand to include diagnosis and treatment for other conditions.

Mrs Vining said Blair is very sick and they are in Dunedin, receiving treatment. She would be travelling to the meeting alone.

''I'm hoping going to the meeting tonight, we're able to generate some support.''

She said they had thought about fundraising for each individual who came their way - ''but that just became an unsustainable option''.

Representatives from the 12-year-old Canterbury Charity Hospital in Christchurch would also attend. Its founder, Prof Phil Bagshaw, had acted as mentor to the Vinings in their plans to get the service running.

The meeting was being held at 6pm at the Findex Building, 173 Spey St, Invercargill.