By Laura Smith
0 Comments
A proposal to ban the trade of extinct animal remains has been in consultation since it was announced last year. Otago Daily Times reporter Laura Smith took a look at what such a ban might mean from a scientific standpoint.

What can a moa and frog have in common? Well, a lot apparently.

Despite the obvious differences in size, it turns out the bones of both can be highly valuable.

A discovery of an extinct frog was made from a bone found in a Southland cave system known for its moa and, for the museum safeguarding it, has highlighted the importance of a proposed trade ban on extinct species. 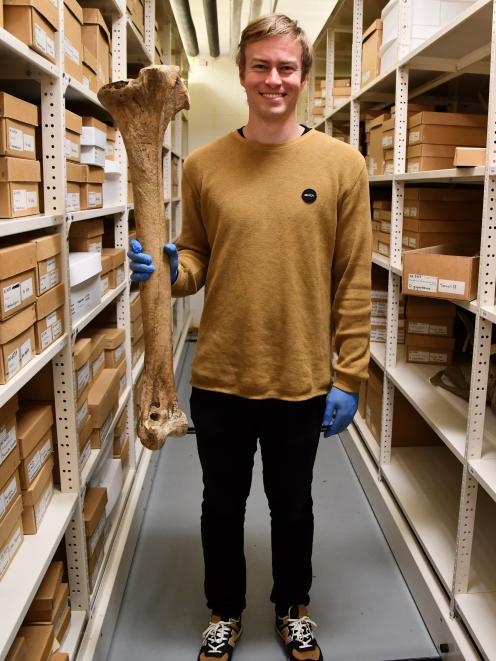 Held together by wire, the large hip, leg and foot bones of the big bird were discovered to have been taken late last month.

The sale of moa bone is not illegal, but it could soon be under a government proposal announced last year.

Recent examples of specimens for sale fetching a pretty penny include a moa skeleton which was one of the main attractions of a Dunedin auctioneer’s taxidermy auction in June this year.

Proctor Auctions auctioned the skeleton of a male heavy-footed moa and salesman Jordan Proctor previously said the possible new regulations meant the skeleton might be the last one the firm sold, it having sold another set of bones the month before.

The skeleton sold in June went for $28,000 and was listed with the description: "Found in Takaka region all together so more than likely from same bird. Complete with gallstones."

The skeleton sold previously was possibly from Southland and sold for $44,000 in the Ultimate Man Cave Auction.

Moa bones have been sold overseas, including through art and luxuries auctioneer Christie’s. A 2013 listing described the right tibia, left femur, right tarso-metatarsal and dorsal vertebra of a moa was estimated to be worth £2000 ($NZ3842) to £3000. The price realised was £3000.

Then conservation minister Eugenie Sage explained the Extinct Species Trade Regulations would prohibit — with some exemptions — the sale and purchase of bones, eggs and other remains of extinct native species.

Public consultation closed more than a year ago. 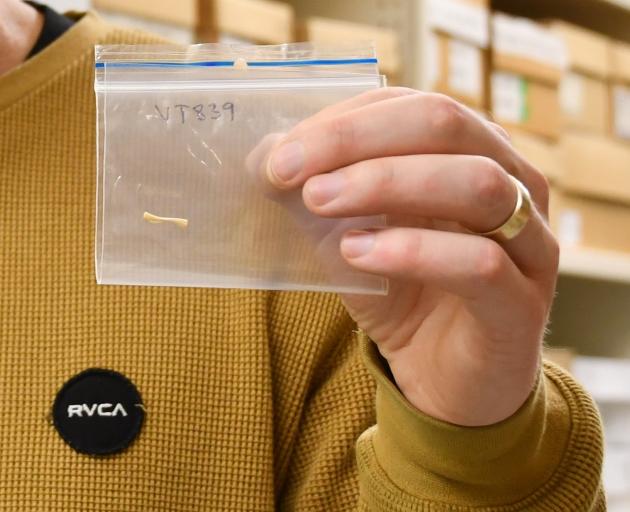 This bone, found in a Southland cave, is the only evidence a now extinct frog ever existed.
While submissions are not yet public, some 40 people and groups submitted their views.

When the proposal was announced, the now Green Party list MP described its purpose was to tackle the problem of moa bones and other sub-fossil remains being removed from protected sites and sold.

Since 2010, museum scientists documented more than 350 instances of moa bones and eggshells being offered for sale, and in many cases identified that these items had been recently removed from protected sites.

“The proposals to use regulations under the Wildlife Act to prohibit the sale of the remains of extinct species, with some special exceptions, would remove the financial incentive that leads a few selfish people to vandalise our natural and cultural heritage,” Ms Sage said.

Otago Museum was one of many around the country to jointly make a submission on the proposal.

While the motive behind the recent theft of moa bones from the Fiordland museum remained unclear, it put the proposed ban under the spotlight.

Otago Museum Natural Sciences assistant curator Kane Fleury took to social media to explain that theft was a reason why he wanted to see the sale of moa bones in New Zealand banned.

Speaking to the Otago Daily Times about the topic, he said the large collection of moa the museum held was used for comparative material in study.

The majority of the material had been found in swamps, cave sites, dune deposits and middens, with many from Southland and Otago.

Having a large collection allowed for accuracy when making inferences about moa.

"Over time, this collection has helped influence a lot of the scientific thought in what we know about moa today."

It went beyond moa, however, in that it was useful in learning more about other species that had been found in the same places, as well as for learning what could be done in conservation now.

When people foraged and fossicked for moa bones from places they should not, it often destroyed that contextual information, he said.

Those who hunted for moa bones often wanted to find the most valuable offerings, but this selective taking meant incomplete information for both what was taken and what was left behind.

Seemingly insignificant, a bone the size of a fingernail was found in a Southland cave system where moa had been found.

It belonged to an extinct species of frog, and was the only evidence it ever existed. 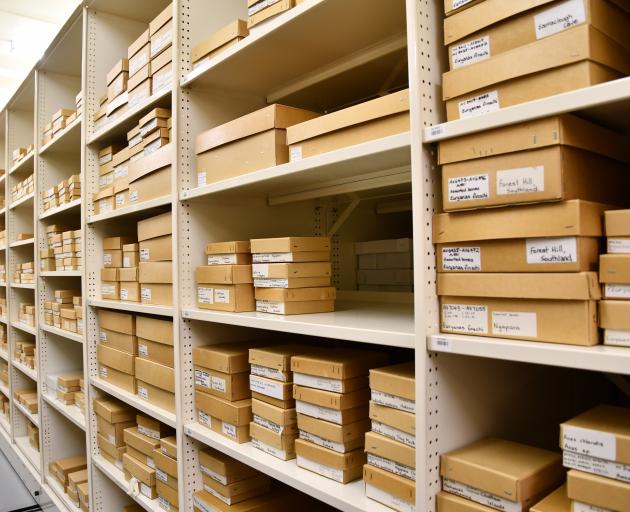 Mr Fleury explained that the trouble was, when people looked to make a quick profit from moa, they could easily destroy such inconspicuous evidence.

Department of Conservation senior policy adviser Michael Gee said the second phase of its engagement with iwi was under way.

"Once engagement is complete, final recommendations will be provided to the Minister of Conservation for her consideration.

"We continue to engage with Doc to ensure an appropriate process for the management of extinct taonga species and their remains is developed in partnership with Te Runanga o Ngai Tahu."

She detailed how taonga plants, birds and other native wildlife traditionally helped to sustain Ngai Tahu tipuna (ancestors) and were part of Ngai Tahu whakapapa and identity.

"Many of these species are now extinct. The remains of extinct taonga are irreplaceable and beyond value as nga morehu – the few precious survivors – and so must be treasured and protected with the utmost care and sensitivity according to tikanga and kaitiakitanga."

As for taonga on display in museums, she explained its stance would depend on the context and nature of the taonga.

"For Maori taonga in the Ngai Tahu takiwa, the relevant Papatipu Runanga should be fully involved in decision making as kaitiaki of their rohe.

"Our minimum expectation is for the Crown to ensure compliance with the processes under the Heritage New Zealand Pouhere Taonga Act 2014 and Protected Objects Act 1975, with taonga tuturu returned to iwi/hapu ownership."