Wanaka's cafe culture is growing due to the influx of tourists. Photo: Kerrie Waterworth
Worldwide, more people are travelling than ever before, fuelled by greater global prosperity, cheaper air travel and the rise of the middle class in many emerging markets.

In the past three years New Zealand's popularity as a tourist destination has grown so significantly, its proportion of national export earnings now makes it larger than New Zealand's dairy ($12.9billion); and meat, wool, fruit and oil industries combined.

By 2023 it predicts visitor numbers will reach 4.9million per annum.

"We know there is a tsunami of tourists coming and we can't stop it because it's a free market, so we can either stick our head in the sand and say we don't want the tourists to come but they'll come anyway, or we can say `what do we need to do in order to be ready for it so everyone is happy' or we can leave; those are the choices."

Tourism is arguably the biggest industry in town, injecting an estimated $502million annually into the Wanaka economy, creating jobs and sustaining livelihoods.

The Wanaka region has been ranked No1 in New Zealand for percentage growth in visitor spend for more than two years, recording 17% growth this past year on top of 20% growth the year before.

"We all benefit from that success but we want to make sure it is a sustainable form of business, which means we need to make good money and the community needs to be happy.

"If the community starts to become unhappy they will start to tell the visitors they're not happy, then the visitors will stop coming, the financial incentive drops, and we all miss out.

"So it is about getting that balance right," Mr Morrison said.

Thousands of tourists take pictures of the tree in Lake Wanaka each year. Photo: Tim Miller
The November Mood of the Nation survey, commissioned by Tourism New Zealand and Tourism Industry Aotearoa, found more New Zealanders (40%) were worried about the pressures arising from tourism growth, and pressure on infrastructure remained the top concern.

In the Link community research conducted in Wanaka last year one of the three questions asked was "What could be better?" From the 600 responses to the survey, Link co-ordinator Kathy Dedo said "better infrastructure" and "managing growth" were two of the top five themes in response to that question.

"The tension comes when the systems and infrastructure do not get the support they need to extend the hand of hospitality to our visitors," she said.

Air New Zealand is expected to start operating direct Wanaka to Auckland flights within the next five to eight years.

International flights into and from Wanaka airport are expected in the coming decades.

"Change is coming", Mr Morrison said, "but the key is to plan ahead of the change and start the conversation."

"We are an important conduit for the council to get information out to the business community and to talk to the broader community," Mr Helmore said.

"We want to know what the council is doing and we will be communicating that to the 470 tourist businesses we advocate for and represent," he said.

In May, Lake Wanaka Tourism will be holding a strategy session with key Wanaka stakeholders to plan how Wanaka can best prepare for the increase in the number of tourists to the region.

"We are going to have a conversation about what we want the future of our region to look like, taking all the viewpoints of all our different stakeholders, and how to work effectively together to bring about that future vision," Mr Helmore said.

He said the single most important and urgent need in the Wanaka region was more infrastructure.

"If our infrastructure could accommodate a great number of people then I don't believe our community would have an issue with having more tourists in Wanaka, but in saying that you can't talk about the pressure of more visitors without taking into account the residential growth that happening now. We need to get more investment in infrastructure and we need to talk about how that is going to be paid for because as a rate base we can't do it," he said.

In the recently released draft Queenstown Lakes District Council Ten Year Plan 2018-28 visitor growth was highlighted as one of the challenges faced by ratepayers as the ratio of visitors to residents is 34 visitors to one resident, whereas the ratio in Auckland is one to one and Christchurch three to one.

In the Mayor's message Jim Bolt said he has made a "unique a business case to central government asking for assistance because we are shouldering more than our fair share of the pain that is coming from the growth of tourism". He said if the funding was not provided in some form, such as a visitor tax or levy, then "the Queenstown experience will start to compromise the New Zealand visitor experience, and worse, negatively impact our communities."

Mr Morrison believes to a certain extent the coming tsunami of tourists has taken everyone by surprise.

"Five years ago everyone was crying out to get more tourists here. Now, five years down the track, we're going `oh my goodness, there are so many tourists here it's crazy'. In that classic lackadaisical New Zealand way, we have gone `come on over bro' and now it is like `oh s...'."

He said the worst possible course of action from a business, environmental and community perspective would be to do nothing.

"We can still be a success but we are at a crossroads."

Following protests in Venice and Barcelona last year about the increasing number of tourists to these destinations, UNWTO

secretary-general Taleb Rifai told the Guardian newspaper "If managed correctly, tourism can be the `best ally' to conservation, preservation and the community. UNWTO recommends a number of proven methods for managing crowds in destinations, such as encouraging tourists to visit beyond the central sights, diversifying tourist activities, reducing seasonality and, importantly, addressing the needs of the local community." 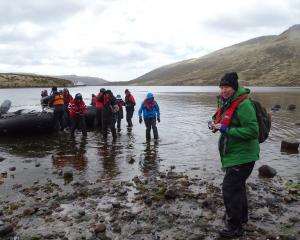