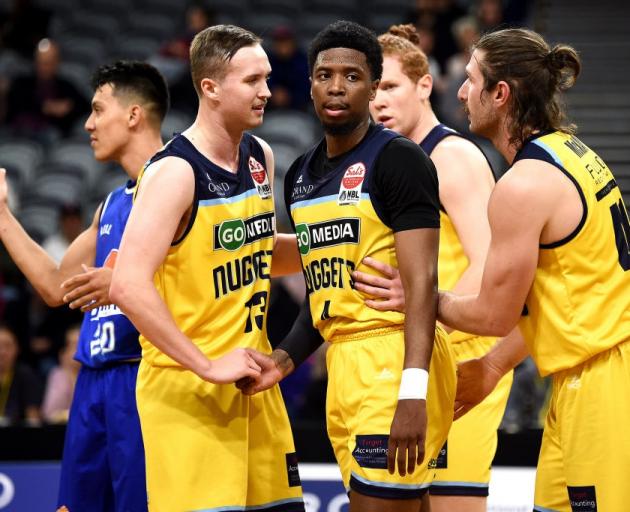 Otago Nuggets (from left) Josh Aitcheson, Isaiah Moss and Geremy McKay gather to talk during a game earlier this season. PHOTO: GETTY IMAGES
A change in ownership of the Otago Nuggets will have many benefits for basketball in the region, franchise general manager Angela Ruske believes.

SENZ, a subsidiary of Australia’s Sports Entertainment Group Ltd, will take 100% ownership of the National Basketball League franchise — formerly owned by Ruske’s Nothing But Net Ltd (60%) and Basketball Otago (40%).

The Australian company owns the Perth Wildcats and also has a stake in Melbourne United. Both are among the top teams in Australia’s NBL.

The deal follows the return of the Nuggets last year after five years out of the league following financial difficulties in 2014.

SENZ had been looking to take on a licence for an NBL team.

However, no new licences were available until 2024, so Nelson had suggested the company could look at buying into an existing franchise.

He set up a meeting between the business and the Nuggets, at which point Ruske said it became apparent it would be a good deal.

‘‘It became obvious very quickly that it was an awesome opportunity,’’ she said.

‘‘Not just for our players and coaches, but for the basketball community in general, and the local community.

‘‘So it was far too good an opportunity to turn away. We obviously needed to get shareholders on board.’’

Ruske said SENZ was maintaining a commitment to Otago and it was not planning on making big changes.

She was also confident the change in ownership would not put the Otago-based franchise in jeopardy.

‘‘We talked that one through with the company and the NBL,’’ she said.

‘‘The Nuggets name and locations, they can’t change without approval for the NBL.

‘‘The NBL have no desire to shift the Nuggets, so they can’t just up and relocate the Nuggets, and they have no intention of doing that anyway.’’

She said the Nuggets would be able to utilise the links with both Perth and Melbourne.

That would benefit the team in a basketball sense, and also provide valuable insights in terms of off-court expertise.

Ruske said it would also provide SENZ the opportunity to expose its brand and connect with both fans and potential consumers.

‘‘Our business has long championed local content for local fans and that’s exactly our plan with the Otago Nuggets,’’ Simm said.

‘‘We are committed to the Otago Nuggets team staying in Dunedin and maintaining a strong connection with the Otago community.

‘‘We support the resurgence of basketball in the region and will continue to support grassroots participation with our involvement in the Nuggets.’’

Basketball Otago chairman Andy Kilsby was excited by the move.

He said having the added sustainability for the region’s pinnacle team was crucial.

‘‘I think it opens potential for greater support to come down through the layers,’’ Kilsby said.

There was also opportunity for players ‘‘to look at more pathways for development’’.

‘‘Having an organisation of their size and standing supporting basketball, through the Nuggets, into Otago, is going to be exciting.’’