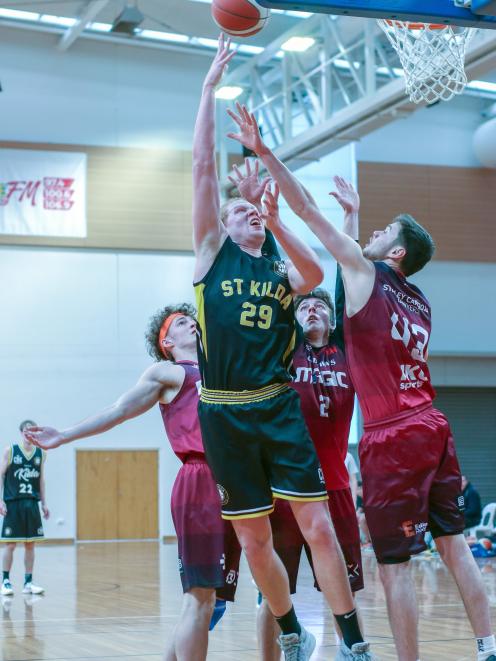 St Kilda Saints centre Jack Andrew shoots in front of Mid City Magic defenders (from left) Tim Kent-Royds, Joe Ahie and Tai Poirima-Flavell during the Dunedin men’s basketball playoff game at the Edgar Centre on Saturday. The teams are due to meet again in the final this weekend. PHOTO: WALTER SAVAGE
Uncertainty surrounds one of Dunedin club sport’s biggest days.

Netball, hockey and basketball all had premier finals scheduled to be played on Saturday.

However, the shift to Covid-19 Alert 4 until at least tomorrow may cause a reschedule.

The Otago Hockey Association confirmed yesterday it would postpone its club finals, and its elimination finals could not be played last night.

More information about potential rescheduled dates will be available on Monday.

A decision about its secondary school finals, scheduled for Monday and Tuesday, will be made tomorrow.

Netball and basketball were still considering their options yesterday.

Dunedin Netball operations manager Lee-Anne Anderson said premier and senior finals were set to be hosted on Saturday and school grades over the following week.

Saturday’s card included the premier A final between the Southern Magpies and Physed A.

While it was too early to make a definitive decision, she said the organisation was looking at options and planning for various scenarios.

‘‘These scenarios are all dependent on a change in alert levels to at least Level 2, where we can run competitions in zones within the Edgar Centre, with limited numbers,’’ Anderson said.

‘‘Our first priority is ensuring our members are safe and all our planning is based around this.”

In Dunedin basketball, the men’s A grade semifinal was played at the Edgar Centre on Tuesday night, starting just before the announcement of the move to Level 4.

However, Saturday’s finals — set to feature all men’s grades — are now in limbo.

That includes the A grade final between the St Kilda Saints and Mid City Magic.

Basketball Otago general manager Peter Drew hoped the games could go ahead, but would follow advice from authorities.

‘‘We would very much like to be able to go ahead as scheduled,’’ he said.

‘‘However, we will be guided on this by the recommendations of the New Zealand Government around the updated Covid situation.

‘‘If it is not possible to proceed on Saturday then we will assess our alternative options depending on what the updated Covid situation is.’’

The Dunedin women’s basketball finals were played two weeks ago, but the Otago Gold Rush’s National Basketball League games will not be played this weekend.

All football has already been suspended for this weekend, New Zealand Football citing the potential for a lockdown extension and a short turnaround between alert levels.

That includes the Chatham Cup and Kate Sheppard Cup semifinals, which NZF has confirmed will be rescheduled.

No southern teams were left in either cup competition.

The remainder of the New Zealand short-course swimming championships have been postponed.

The meeting began in Auckland on Tuesday, and some races took place.

However, it was announced the final four days will be rescheduled following Tuesday night’s announcement.

Otago had 21 swimmers in Auckland for the event.

A Swim Otago spokesman last night said local swimmers were either already home or making their way back within the 48-hour window allowed under Level 4.