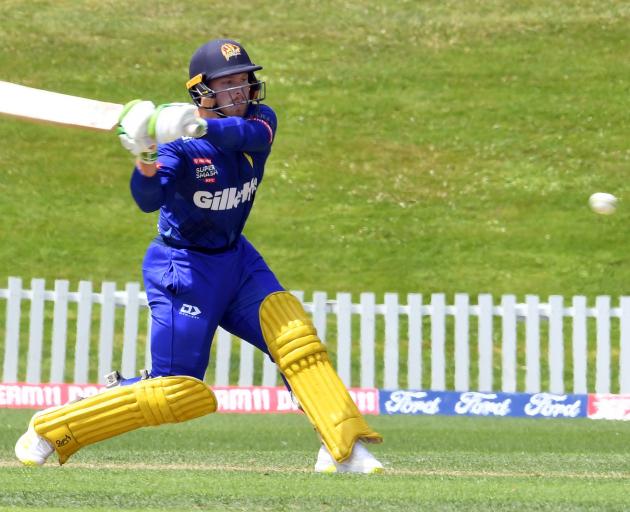 Dale Phillips top scored for the Volts but it was not enough to trouble the Kings. Photo: Stephen Jaquiery
The Otago Volts initially looked to have fought their way to a competitive total.

In the end, they were not even close.

The Canterbury Kings dismantled the Volts bowling attack in a devastating manner at the University Oval yesterday.

Canterbury claimed an eight-wicket win with 2.5 overs to spare, taking good form into Thursday's Super Smash elimination final against the Wellington Firebirds at the same venue.

The Volts' innings had stuttered at times, but a handful of solid performances and a strong finish got them through to 185 for eight.

It was a total that never troubled the Kings, though.

Tom Latham ensured the visitors were well-ahead of the game from the early overs.

At times it was his delicate precision, finding the gap seemingly inch-perfect to pierce the Volts' field.

At others it was his straight power – which he used to devastating effect as he hit five sixes.

Indeed he had 38 off just 11 balls, putting Canterbury well-ahead of the run rate inside four overs.

He slowed down as the powerplay ended and the Volts spread their field.

But he kept ticking the score over and when he departed for 66 off 35 balls, Canterbury was in a strong position.

No 3 batter Daryl Mitchell was equally powerful and showed his quality in finishing the chase.

He and Latham put on 63 runs for the second-wicket, before taking control to steer the Kings through to their target.

He finished with 68 off 39, clearing the boundary rope on four occasions.

Earlier Neil Broom got Otago off to a flying start.

The opening batter hit back-to-back sixes off Canterbury seamer Matt Henry in the second over.

However, at the other Henry Shipley claimed two wickets in as many balls.

Hamish Rutherford went first, flicking a soft one off his legs to Latham at mid-wicket.

Nick Kelly followed, as he was caught on the boundary by Mitchell trying cut one over point.

That left the Volts at 24 for two.

Dale Phillips joined Broom at the crease and the pair made a handy stand.

That came to an end at 67 for three, when Broom followed up a four down the ground by trying to pick off one too many, being caught by Mitchell at long on.

Angus McKenzie was run out shortly after, but Phillips continued to strike the ball well to keep the scoreboard ticking over at a fast clip.

He brought up his 50 off just 26 balls, before finally skying one to Ed Nuttall at long on, leaving for a well-made 65 off 34 balls.

Anaru Kitchen chipped in with a handy 28, before Michael Rippon finished strongly.

He scored 16 off the final four balls to take himself to a quickfire 38, lifting the Volts to what seemed a competitive total.

Henry Shipley was the pick of the bowlers, finishing with four wickets for 28 runs.