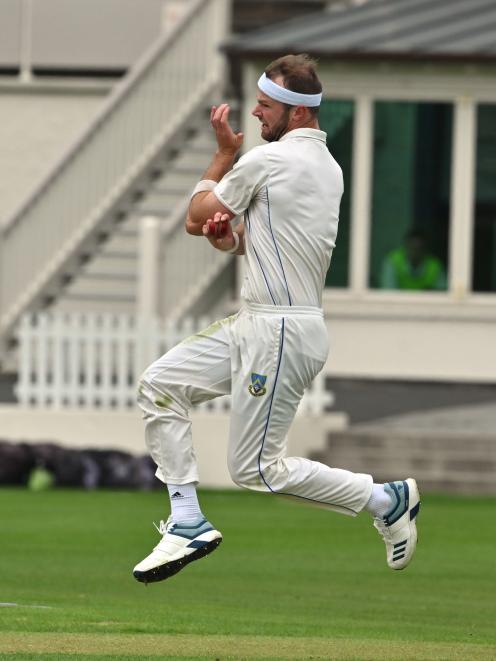 Otago Volts bowler Michael Rae runs in on day two of his team’s Plunket Shield match against the Central Stags at the University of Otago Oval in Dunedin yesterday. Photo: Linda Robertson
Otago is going to have to get aggressive, creative or lucky if it is going to force a result against back-to-back champions Central Districts.

But the Volts have got the first task out of the way. They dismissed the Stags for 297 and were 38 without loss at stumps on day two at the University of Otago Oval.

The opening day was a washout and day two got off to a late start, so the Plunket Shield encounter has been robbed of a lot of overs.

Rapid runs and perhaps a sporting declaration could set up an interesting finish.

That will not be easy against a quality Stags seam attack which includes Doug Bracewell, Blair Tickner and Ben Wheeler.

The visitors did their part to make up for lost time with a positive approach at the crease.

The right-hander was quick to swivel into pull shots, and a good portion of his boundaries came in that fashion.

Hay, meanwhile, played some glorious shots down the ground and looked in control until Matt Bacon nipped a ball back off the seam and bowled him.

He swatted three sixes and three fours to steer his side close to 300.

Central had earlier been teetering at 130 for five, so it was a very decent recovery from the middle order.

The wickets were shared around, but Nathan Smith was probably the pick of the Otago bowlers with one for 32 from 15 overs. He nicked out the dangerous Will Young for 10.

In Hamilton, Canterbury is 219 for seven in reply to Northern Districts first innings total of 294. Stephen Murdoch (56) and Ken McClure (54) have scored the bulk of the runs, while Leo Carter will resume on 37.

Wellington has a healthy 108-run lead in the top of the table clash with Auckland at Colin Maiden Park. It is 287 for five in reply to the Aces total of 179.

Rachin Ravindra (101) scored his maiden century and Devon Conway further enhanced his reputation with a knock of 94.

Otago A’s three-day match against Auckland A in Invercargill ended in a draw after an entire day was lost to poor weather.

Beckham Wheeler-Greenall top scored for Otago A with 67, while all-rounder Angus McKenzie had a strong game. He posted a half century and grabbed three wickets in the match.