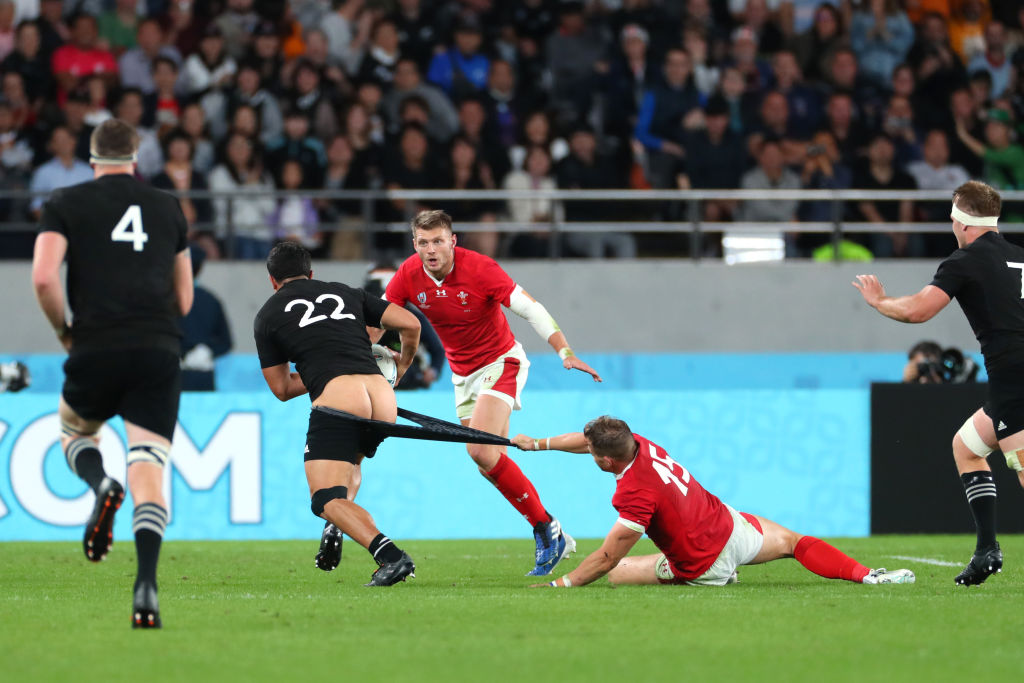 The All Blacks claimed the bronze medal last night with a 40-17 win over Wales at Tokyo Stadium, following a semifinal defeat to England last weekend.

It was the final outing for All Blacks coach Steve Hansen and a number of senior players including captain Kieran Read.

As fulltime ticked over, the All Blacks looked determined to make one final play with Jordie Barrett leading the charge before flicking the ball back to brother Beauden.

Lienert-Brown picked up the following pass but didn't get far as Wales fullback Hallam Amos latched on to the 24-year-old's shorts, pulling them down with him.

"Lienert-Brown loses everything, including his pants," Sky Sports commentator Scotty Stevenson said before adding a brilliant one-liner, "The All Blacks' journey in the land of the rising sun comes to an end with Anton Lienert-Brown's full moon".

Footage of the cheeky wardrobe malfunction sent Twitter users into a frenzy.

"Never predicted the bronze final would finish with the sight of Anton Lienert-Brown's arse but there you go," one fan wrote.

"A victory of 'Shorts' for Wales, at the end... Anton Lienert-Brown putting it all on the line," wrote another.

"Almost a flash of brilliance from Anton Lienert-Brown there."

Lienert-Brown was one of the standout All Blacks at the World Cup, putting in a string of solid performances and becoming Hansen's first choice second-five.

Last month, though, Lienert-Brown told the Herald he considered giving up the game a few short years ago.

"Things all got a bit much and that stemmed from rugby taking over my life," Lienert-Brown said.

"All my thoughts were about rugby. It was who I was. If I had a bad training or bad game that controlled my life. It's not a very pleasant place to be when that happens because some things are uncontrollable and you have to have a balance."