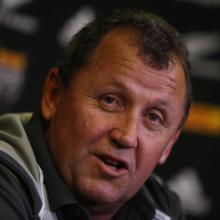 Ian Foster. Photo: Getty Images
All Blacks head coach Ian Foster has revealed the major concerns on his mind ahead of his first international season in charge of the iconic team.

After being confirmed in the role in early December, Foster quickly assembled his wider coaching team and told Sky Sports' The Breakdown this week that he's eager to get busy managing a side with plenty of question marks in its post-World Cup transition plans.

"What's keeping me awake? I'm just too excited – I just want to rip into it."

Foster says one of the biggest hurdles the team has to overcome is the loss of experience within the squad, but he has a positive attitude when it comes to those players waiting in the wings.

"I think we've got a bunch of guys who have got a point to prove, and we've got some great opportunity to bring some new talent through, so it's quite nice looking at a bit of a clean slate.

"You look at the likes of Reado [Kieran Read] – big shoes to fill – and you look at the experience of Brodie Retallick, who is going to be away for a year and a half. You can't replace those guys. But what they do is they create great opportunities for the next tier."

The loss of Read at number eight, along with Liam Squire, Luke Whitelock, Jordan Taufua and Matt Todd as back row utilities has seriously thinned Foster's options at the back of the scrum and he'll be looking closely at Super Rugby form for replacements.

"It's not a position of concern, but it's definitely a position of interest. We used Ardie [Savea] there before, and I love the potential of what he does, you have to have him on the park, and we've got a number of guys we've utilised.

"This Super campaign is really vital for those positions – six and eight – we need people to actually show week-in, week-out that they've got what it takes to make the next step."

Another position the loss of Read opens up is that of the captaincy. Of the 2019 World Cup squad still playing in New Zealand, only Sam Cane has previously captained the side and, form permitting, is the presumed front-runner for the role. Though Foster eluded to the idea of having multiple players in mind for the position.

"We've got to sort a captain out, so there are a few thoughts going on in that space."

The final issue on Foster's mind, along with many other coaches and players around New Zealand right now, is the resting of key All Blacks during the Super Rugby season.

The convention, which has been in place since 2010, is New Zealand's top players will play 40, 60 and then 80 minutes over the first three rounds of Super Rugby, although that could be managed differently – for example 60/60/60. They also get two weeks either to spend away from the team or to focus on their physical conditioning.

The so-called 'load management' policy has been panned by some critics who argue that the rule alienates fans and devalues the competition with the absence of its stars.

Foster says the policy is constantly evolving and reviewed, but is necessary to keep the country's top players happy and healthy.

"It's not perfect. We're hearing voices, we understand that it doesn't fit everyone, but we just need to get together with the coaches again and have another talk. We've all agreed on what we wanted to do for this year, and now everyone's saying there's some other ideas – well that's great, let's listen to them, and figure it out.

"We have listened before, and we've come up with a plan. Now suddenly people have voiced quite vocally that there's a few things about it they don't like, well that's okay, we probably would have liked to have heard it a different way, but that's the way we heard it, and that doesn't mean what they're saying hasn't got some validity.

"This isn't a 'them vs us' thing. It's a 'how the heck do we get players performing at their peak right through a long season?' It does require breaks, and it does require some management of time and there's always a cost to them.

"If you look at the results of it, we've been pretty good in Super Rugby. We often have four teams in the playoffs and we've won it regularly, and the same with the All Blacks. So the overall policy is working."

Foster's first test in charge of the All Blacks takes place on July 4 when the team takes on Wales at Eden Park.