Joseph could coach the best but accept a pay cut 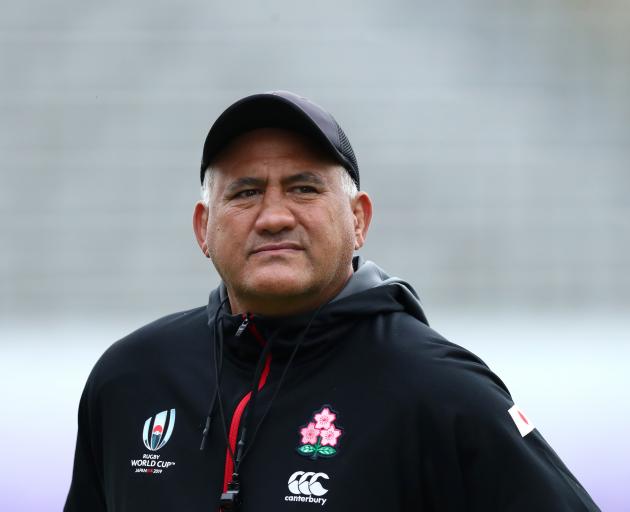 Jamie Joseph is likely to have plenty of suitors should he not land the All Blacks' top job. Photo: Getty Images
Jamie Joseph appears to have a fallback option should he fail to become the next All Black coach.

But he may have to take a pay cut to get the top job in New Zealand rugby.

Joseph is one of the front-runners for the position which has become vacant after Steve Hansen moved on after eight years in the job.

New Zealand Rugby announced earlier this week a five-member panel to oversee the selection of the new coach. It is hoped to have one appointed by Christmas.

Joseph is believed to have arrived back in New Zealand this week after coaching Japan at the World Cup. He could not be contacted yesterday.

Japan reached the quarterfinals of the World Cup and Joseph received plenty of plaudits for his coaching of the team.

Reports had indicated he had been offered an extension to his coaching contract with the Cherry Blossoms team but nothing had been confirmed.

Joseph is right in the running to be head coach for the All Blacks.

His stocks rose considerably this week when Tony Brown said he would be Joseph's assistant, wherever that may be, and he would not be joining any other coaching candidate.

Brown was believed to have been approached by fellow head coaching candidates Ian Foster and Scott Robertson but his decision to go with Joseph is a feather in the cap of the former Highlanders head coach.

Brown is highly regarded as an attack coach.

There was also a suggestion Joseph might join with Foster and Brown as one team, Foster as head coach, Joseph looking after the forwards and and Brown doing the attack.

But Joseph, who has impetus in his favour, might want to go it alone as head coach, with Brown now, as he has timed his run well.

NZR chairman Brent Impey on Wednesday said 26 candidates had been contacted about the role.

But realistically, Foster, Robertson and Joseph will be the leading three candidates for the job, and it is hard to see anyone else getting a look in.

Others might look at coming along as assistant coaches and in this process it is just as important who the members of coaching the team are.

Joseph, who coached the Highlanders for six years, after coming into the job in 2011, also has the advantage of previously working with All Black defence coach Scott McLeod. The two coached together for four years in the South.

Hurricanes coach John Plumtree, who first introduced Joseph to coaching about 15 years ago, in Wellington, might also be a wildcard to join Joseph. Plumtree has been involved with the Japanese team in recent years.

Joseph has plenty of ambition and coaching the All Blacks is the ultimate goal of any coach in this country.

But should he fail in that regard, he is likely to head back to Japan and coach the Japanese national side for another four years.

Japan has offered big money for Joseph to go back there and in reality he would get less for coaching the All Blacks.

But coaching the All Blacks is a job where money is not the only consideration. The role is a prestigious position in rugby circles.