Huge turnaround this season for Excelsior 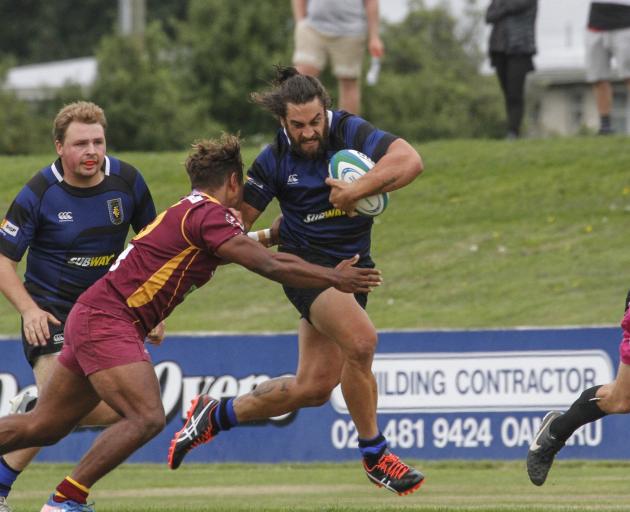 Excelsior centre Taina Tamou tries to fend Athletic Marist winger Simon Lilicama during a Citizens Shield game in Oamaru last month. Excelsior winger Tayne Russell is in support. PHOTO PHIL JANSSEN
Excelsior is a Latin word often translated as ever upward and the club is certainly living up to its moniker this season.

It knocked Old Boys off its perch last weekend. The 25-7 win was no mean feat either.

Old Boys is a perennial powerhouse in the Citizen Shield but faces stiff opposition from Excelsior as well as Valley this season.

The three teams are jostling at the top of the standings.

For Excelsior, though, the rise has been rather rapid. The club bottomed out last season.

It claimed the wooden spoon and many might have forecast similar results this year.

But it has three wins from four games and is travelling nicely, coach Dan Keno said.

"It has been a massive turnaround and I see a lot more hunger this year,'' he said.

"Look I don't mind telling people ... that at this time of the year we normally have eight to 10 people at training. This year we are getting 16 to 20, so we can actually do things and start implementing processes and working through what we are trying to do.''

The team also had a decent pre-season which proved enormously helpful.

"We had a camp, which we haven't done before, to go over game plans and how we want to play ... so there has been a bit of work go into it.

"But we are probably a wee bit shocked to start so well. I sort of thought we might build into it with the couple of new faces we've got.

"It is pretty pleasing.''

Keno is in his fourth year at the helm and has been joined by Hamish McKenzie this year. They have worked together before and have got the team playing good rugby.

That new personnel he mentioned have also brought some good energy to the club. English first five-eighth Tom Moysey is providing good direction.

Hard-running centre Taina Tamou has transferred from Athletic Marist, and talented loose forward Mosese Aho (from Waimate) is making a difference as well.