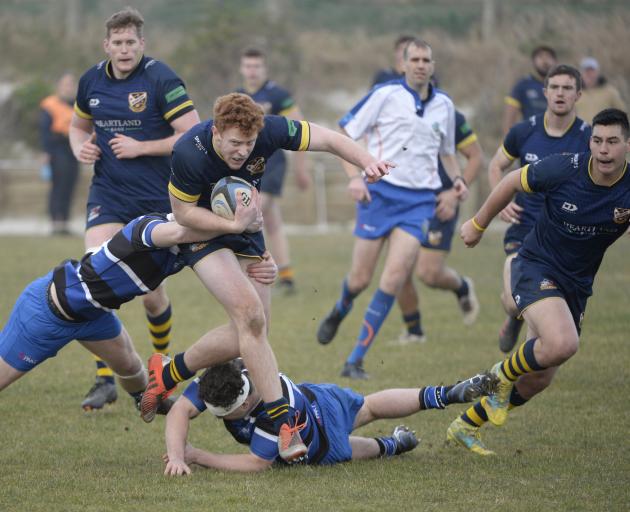 Dunedin first five-eighth Harrison Boyle evades one tackle but gets caught in another during a premier game against Kaikorai last weekend. PHOTO: GERARD O’BRIEN
Those Eels are slippery.

Taieri has strung together three wins in a row and it has found a different way to win each time.

It is a roll-your-sleeves-up type of team in the sense it does not have the X-factor players some of the other teams possess.

But it compensates for any shortcomings through excellent defence and wonderful organisation, trademarks of the team for the past few seasons.

Those qualities helped it hold off a fast-finishing University side at Peter Johnstone Park last weekend.

It clung on to 16-13 win with a tenacious defence effort.

A week earlier it held its nerve to hold back a strong rally from Harbour to win 21-20.

And against Kaikorai it trailed 21-0 before pouncing into action and rescuing a 32-31 win.

The team’s only defeat came against Dunedin during the opening round and that match was lost in the final moments.

Assistant coach Scott Guthrie felt the side had shown a lot of resolve.

"Obviously, we’ve had some narrow results," he said.

"We could easily be 0-4 at this stage but the boys have shown some fierce determination in defence, a great willingness, and they’ve have a never-say-die attitude.

"I guess when you look through the team ... We have some unknown players and guys who have not gone on to higher honours or whatever. But they just get on with the job."

Guthrie said the team spent a lot of time working on its defensive structures. It is a key plank in the game plan.

"It is something the team works hard on and prides itself on."

Taieri’s record is more commendable considering it is without its two leading locks.

Don Lolo fractured a bone in his arm during a pre-season game and Ben Morris will also be unavailable for a few more weeks. He has a knee and ankle complaint.

Taieri will play Alhambra-Union at the North Ground tomorrow. Alhambra-Union’s campaign is gathering momentum. It shocked Southern 24-12 a fortnight ago and edged Green Island 23-16 last weekend.

Taieri will start as favourite. But the tournament is closer than it has been for many seasons and correctly picking the results of games has been difficult.

In the other matches, Southern hosts the winless Green Island, Harbour is at home to Dunedin and University should be too strong for Zingari-Richmond at Logan Park.