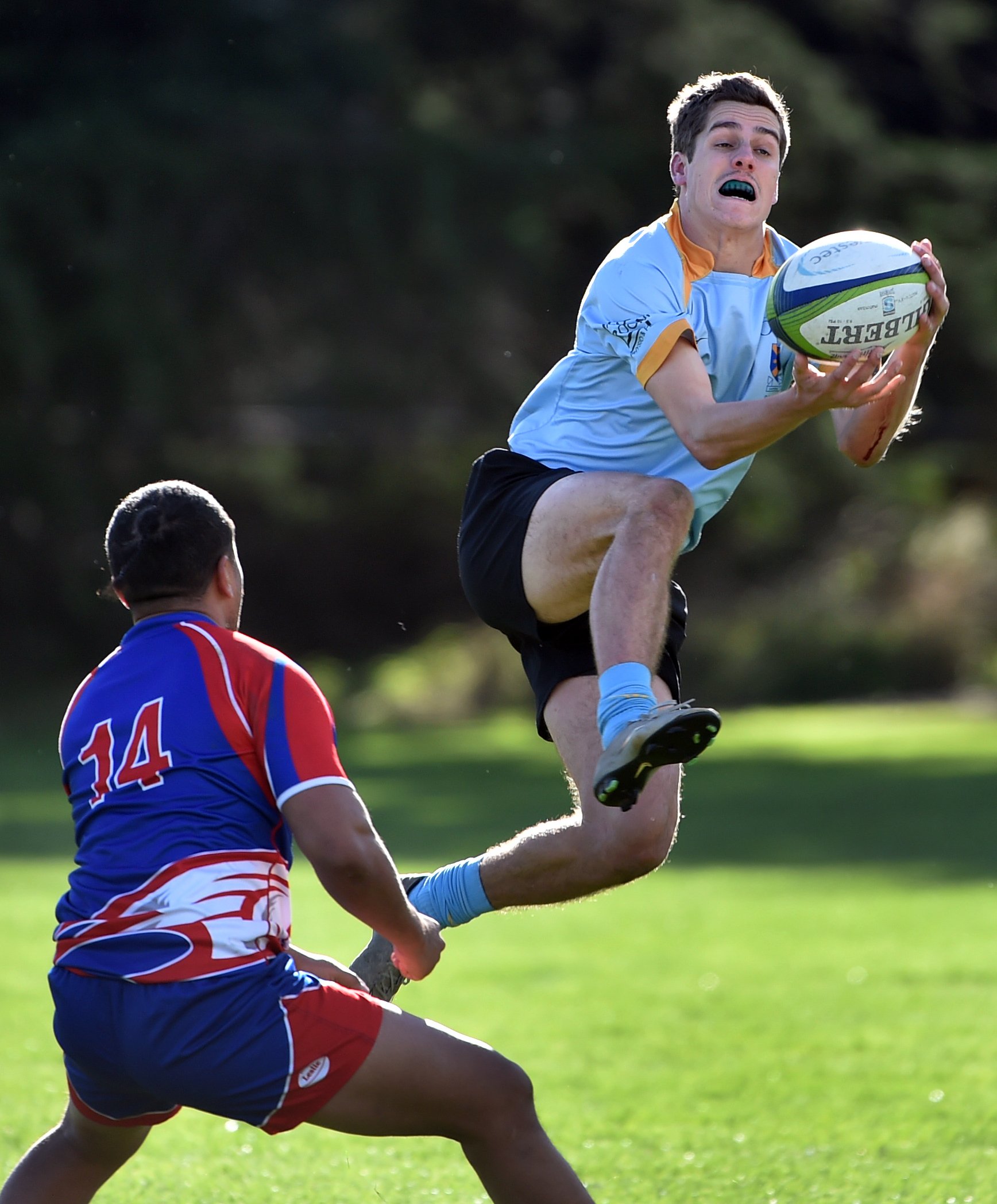 University winger Cam Gerlach catches the ball while Harbour winger Ngana Nicholas looks to defend. Photo: Peter McIntosh
University does not seem to have taken notice of any thought this would be a rebuilding year.

The team is unbeaten going into into its fifth game of the season tomorrow, against Green Island at University Oval No4.

That may come as a surprise, as it has lost a raft of key players including the likes of Sione Teu and Fa'asiu Fuatai, as well as head coach Rahul Das.

However, new coach Peter McIntyre has had no problems filling the void.

He had coached many of the players in the club's colts teams over the past few years. That familiarity was helping and he was impressed with how they had adapted to the physicality and pace of premier rugby.

"A lot of those players have played together in some form or another over the last two or three years, so they know each other," he said.

"We have had, over the last five years or so, a good colts programme which is starting to reap rewards, hopefully."

Alongside that, giving players freedom and the ability to back themselves had been key to them stepping up so well.

The side had played a pre-season match against the three-time defending Christchurch competition champion Lincoln University. Although it lost the game, it competed well and that had given University's players confidence.

Knowing there was likely to be some player turnover, the club had let its potential squad know its plans for the season late last year. That had allowed it to get a jump in preparations and a "really solid" pre-season had ensured players were coming in fit.

From there it has gone from strength to strength, notching wins against Kaikorai, Alhambra-Union, Harbour and Dunedin.

McIntyre said the side was looking to play an open, fast game, as per University tradition.

However, it had also excelled in the tight, where its front row provided a strong platform.

Loosehead prop Kilipati Lea had been outstanding in that regard.

There were several others to have shone as well. The loose forward trio of Sam Dickson, Jack McHugh and Mark Thorne had started well, while in the midfield, Tyler Berry and fullback Tom Morrison had also stood out.

For McIntyre, though, it was the depth in the team that was the real positive. That meant he could confidently rotate his players and cover for injury, while also creating competition for spots.

Despite the start, he was aware that it was still early in the season and was not reading too much into the run of form.

He wanted his players to look to improve by 5% each week, in order to keep up the momentum.

"We're just not getting too carried away with things.

"We've got to make sure we have competition within our side, so players have to play each week to a really good standard.

"Other than that we just take it one game at a time."

Kilipati Lea, Taylor Haugh, Connor McLeod and Josh Timu have been selected for the New Zealand Universities team to tour Japan and Singapore.