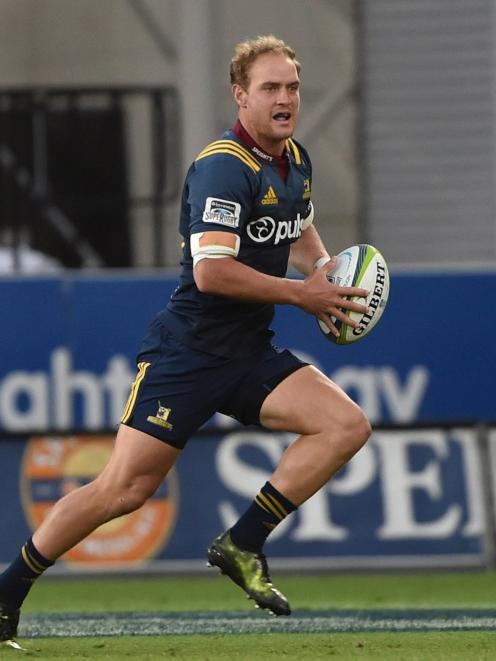 The South Otago High School product announced earlier this week he has signed with the franchise for another couple of seasons.

It has been something of a rags-to-riches story for the utility outside back over the past couple of seasons.

At the start of the 2015 season, he was just playing club rugby for University and did not even have a contract with Otago. He had played  only  12 games for Otago in four years.

But he impressed at centre for the students, as University won the banner, and he forced his way into the Otago side.

He played well for the blue-and-golds in the 2015 provincial competition, as the side made it through to the semifinals  of what was then the ITM Cup.

His performances for Otago led to him signing a contract with the Highlanders.

Last year, he started the season as a back-up player but through injuries to the likes of Waisake Naholo and Richard Buckman ended up playing in all but one of the games for the southern franchise.

He scored 10 tries for the season, including a hat-trick against the Kings in South Africa, and was named player of the year by the players in the team’s end-of-season awards.

With plenty of depth in the Highlanders backline, Faddes (25) has only started a couple of games this season. He is on the bench tomorrow night against the Blues at Forsyth Barr Stadium.Highlanders coach Tony Brown said it was good for both player and side to get Faddes to commit  for another couple of years.

"Obviously he had a pretty stand-out year last year and slowly he is getting a bit more game time this year," Brown said.

"And he is starting to do those things we know he can do. So to secure him until 2019 is awesome for him and great for the Highlanders."

Faddes joins fellow members of the backline in Ben Smith, Buckman, Aaron Smith and Lima Sopoaga in committing beyond this year.

Malakai Fekitoa and Naholo are the main two members of the backline who are yet to commit for next year, while winger Patrick Osborne is weighing up his options.