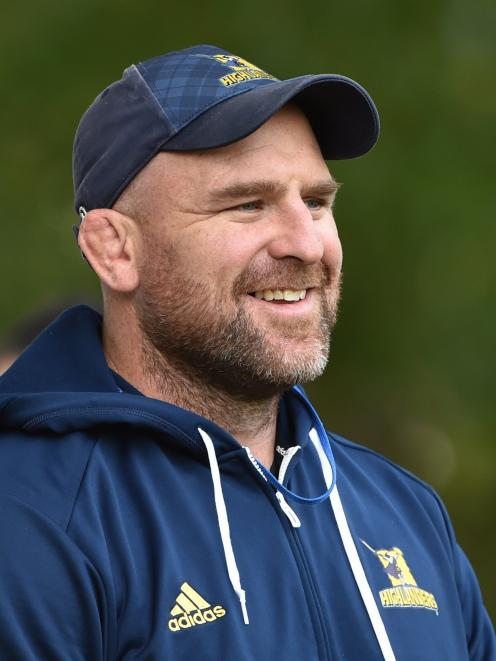 Clarke Dermody. PHOTO: ODT FILES
Former Southland and All Black prop Clarke Dermody is climbing the coaching tree and could be the next Highlanders coach.

Dermody brought up his 100th game as a Highlanders assistant coach in the first match of this year’s Super Rugby Aotearoa competition.

Now he looms as the next cab off the rank after Tony Brown.

Highlanders chief executive Roger Clark said this week it was hoped when Brown finished his job as head coach in 2022 and returned to help Japan for the Rugby World Cup the following year, Dermody might be ready to take the step up.

Dermody had made some real progress as a coach and worked well with the players, Clark said.

Brown said earlier this week Dermody had developed into a top line forward coach and had rapidly improved the Highlanders forward pack in the later stages of the Super Rugby Aotearoa competition.

He had taken over the coaching of the forward pack when Mark Hammett indicated he was moving on at the end of the season.

Dermody is into his second year as the co-coach of the Tasman Mitre 10 Cup team. He works with Andrew Goodman as a coaching team.

Riki Flutey will be the skills and attack coach for the Highlanders while the franchise is looking for a defence coach and Clark
said they would be going to
the market to get the right person.

The franchise may also look at getting spot coaches in from time to time. A spot coach is a specialist coach who may come in to work on an aspect of the game for a short period of time.

Dermody (40) played for the Highlanders from 2004-07 as a prop and also played three tests for the All Blacks in 2006. He made 89 appearances for Southland.

He then headed overseas to play for London Irish for a few seasons in the English Premiership but returned home due to a back injury.

Dermody then took a break from the game before being asked by Highlanders coach Jamie Joseph to come up and help the Highlanders scrum in 2014.

He has been with the franchise ever since and has slowly become part of the furniture in the Highlanders coaching setup over the past few seasons.

The Highlanders will not assemble for pre-season training until the new year. Players will not be finishing the domestic competition until the middle of next month at the earliest and under the players’ collective agreement will then be on leave for a period.

The full structure of next year’s Super Rugby competition has yet to be revealed but it is likely to start at the end of February or even mid March and will involve initially just New Zealand teams, before taking on Australian teams in a form of playoffs later on.

That all depends on the situation with borders and quarantine.