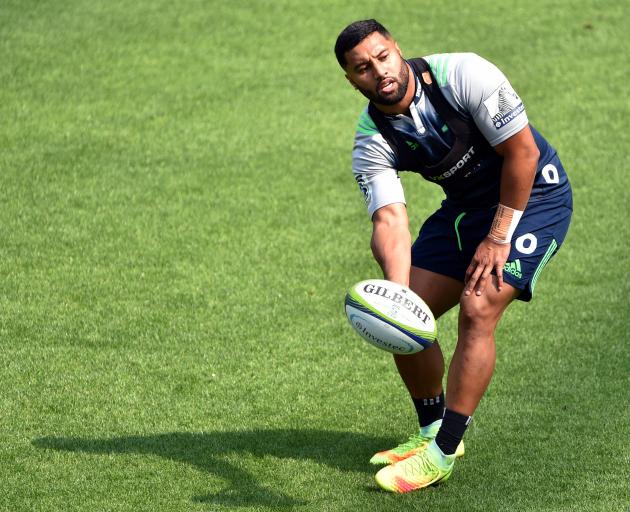 Highlanders first five-eighth Lima Sopoaga. Photo: Peter McIntosh.
Lima Sopoaga may make it back on the field for the Highlanders' next game.

The All Black first five-eighth limped off the field early in last Friday night's game against the Chiefs with what appeared to be a nasty Achilles injury. Sopoaga collapsed just after dropping the ball out and limped off hesitantly, looking as though he had seriously injured his Achilles.

But Highlanders coach Aaron Mauger was more positive about the injury yesterday and said Sopoaga had come through the past few days well.

He had made a good recovery. It was thought he had jammed a couple of bones in his foot and might have strained some cartilage around the area.

Sopoaga was due to have an MRI scan, which would give a clearer picture on what had happened to his foot.

Mauger was hopeful Sopoaga would be available for the Highlanders' next game against the Brumbies at Forsyth Barr Stadium on April 14.

He said the medical team would have more of an idea whether that was possible when the result from the scan came back. But to have him back without missing a game would be a bonus, considering how bad the injury looked when he left the field on Friday night.

Midfield back Sio Tomkinson was the only other injury concern from the game in Hamilton. He sprained his ankle late in the game and it was touch and go whether he would be available for the game against the Brumbies.

Tomkinson came on with just under 20 minutes to go in the game and scored a try with his first touch. He sprained his ankle with just over five minutes remaining but remained on the field.

The Highlanders are on a bye this week, which is their second one of the competition. The side has disbanded this week but will come back together at the weekend to prepare for the match against the Brumbies.

Every team has two byes in the competition and the Highlanders are having these very early on.

They had a bye after playing just one game and will now have to play eight games in eight weeks, beginning with the match against the Brumbies. That span will include a trip to South Africa and two games in two weeks in Australia.

What makes the two byes in seven weeks puzzling is the fact the Crusaders, Stormers and Lions have yet to have even one.